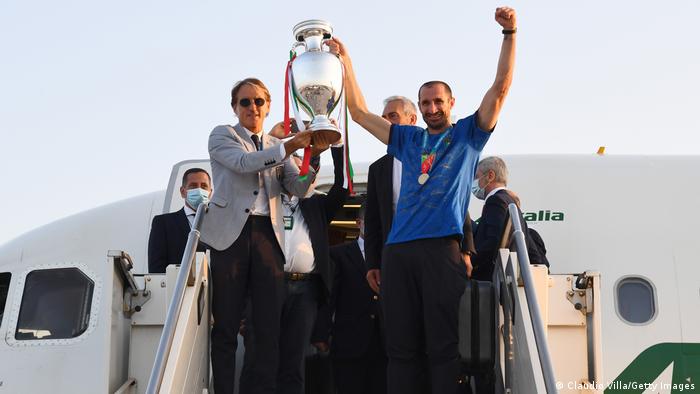 Rome:  The Italian national soccer team returned home to a heroes' welcome on Monday after beating England to win Euro 2020 at Wembley, plunging London into despair as Rome rejoiced.

Giorgio Chiellini, the 36-year-old Italy captain, and coach Roberto Mancini lifted the trophy aloft after the team touched down in Rome with "Azzurri" fans chanting "We're the champions of Europe!"

Thousands of fans packed Rome's sidewalks to wildly cheer as the national side toured the Italian capital in an open-topped bus on Monday evening, crowning a day that saw them honored at the presidential palace and premier's office and cited by the pope.

The team and coaching staff joined Prime Minister Mario Draghi, before a meeting with President Sergio Mattarella, who himself was at Wembley to watch Sunday's match.

"I'm not a (soccer) pundit," the president said at the Quirinal presidential palace as he greeted the team. "But I thought you deserved the victory well beyond whatever happened during the penalty shootout."

Coach Mancini responded, saying: "Let me thank you for being our number one fan. We saw you exult, that gave us much pleasure."

Team captain Chiellini said: "This is the success of a group, who even in difficult moments never lost heart.''

Italy recovered from conceding the quickest goal ever in a European Championship final — after Luke Shaw scored for England with less than three minutes on the clock — to equalize midway through the second half.

They went on to defeat England, 3-2 on penalties, and prolong their opponents' 55-year wait for a second major title.

For Italy, it was the second time they have been crowned European champions. The last time they lifted the trophy was in 1968. The latest success marks a remarkable turnaround after the team failed to even qualify for the 2018 World Cup in Russia.