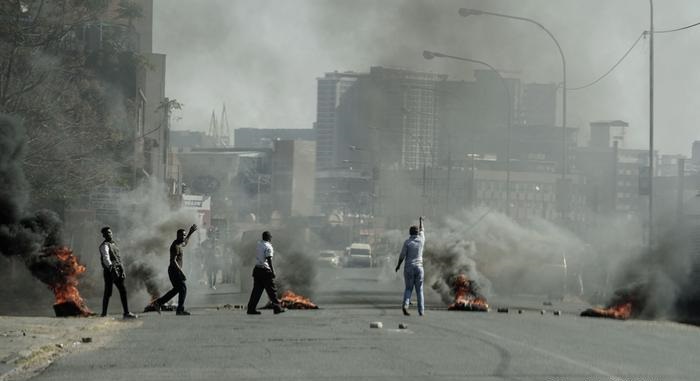 He appeared in court via a video link as supporters of looted shops and set fire to buildings on Monday.

Zuma was jailed last week for contempt of court relating to a corruption inquiry.

The case against Zuma


Zuma was sentenced for defying a constitutional court order to give evidence at an inquiry investigating high-level corruption during his nine years in office until 2018.

In the virtual hearing on Monday, Zuma's counsel asked the court to rescind his jail term. His legal team are relying on a rule that judgments can be reconsidered if made in the absence of the affected person or containing a patent error.

Legal experts say Zuma has a slim chance of success.

The jail sentence marks a significant fall for Zuma, who was a prominent anti-apartheid activist and leader of the liberation-movement-turned ruling party, the African National Congress (ANC).

The 79-year-old remains popular in the province, where he is seen to embody traditional values.

Local media showed footage on Monday of a blaze at a mall in Pietermaritzburg, in KwaZulu-Natal province.

According to reports, the highway leading to the city had been closed to prevent further violence.

In Eshowe, a town near Zuma's Nkandla home, police opened fire to disperse crowds after a supermarket was ransacked early on Monday.

Police said some sections of a major road in Johannesburg had been closed because of the protests.

A South African government intelligence body said on Monday that a total of six people had been killed in violent protests in the KwaZulu-Natal and Gauteng provinces since rioting broke out.

President Cyril Ramaphosa urged for "peaceful protest" during a speech on Sunday.

Although some of the protests appear to have been triggered by Zuma's prison sentence, economic hardship and tightened restrictions brought on by a third wave of the COVID-19 pandemic are thought to be contributing factors.


The corruption inquiry that Zuma has refused to cooperate with is examining allegations that he allowed three Indian-born businessmen, Atul, Ajay and Rajesh Gupta, to plunder state resources and peddle influence over government policy.

He and the Gupta brothers, who fled the country, deny wrongdoing.

Zuma also faces a corruption case relating to a $2 billion arms deal in 1999 when he was deputy president. He denies the charges in that case.

Zuma's core supporters claim he is the victim of politically-motivated harassment by allies of his successor, Ramaphosa.