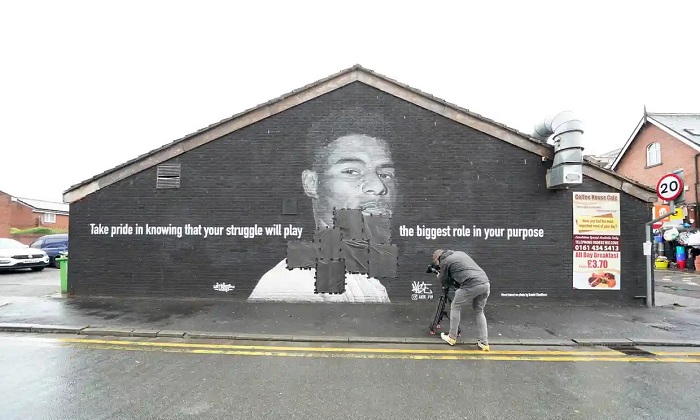 Edward Wellard, Stations Project Management and Works Package Manager in Manchester, condemned this act and said that these types of acts are despicable.

London: After England lost the finals of Euro 2020 against Italy, the mural of striker Marcus Rashford was vandalised.

The artwork present on the streets of Manchester has been defaced in the wake of the striker missing the penalty in the finals of Euro 2020, reported Goal.com. Garbage bags have been placed alongside the mural and the unruly supporters have also covered the artwork with some graffiti.

The Rashford mural was created by street artist Akse in partnership with the community project Withington Walls.

Edward Wellard, Stations Project Management and Works Package Manager in Manchester, condemned this act and said that these types of acts are despicable.

"I've come out to fix what I could immediately and cover-up what I couldn't and hopefully we will get the artist out to come and fix it," Goal.com quoted Wellard as saying.

"We dared to dream yesterday and our hopes were dashed but to wake up to this is more depressing. Racism seems to be more and more prevalent," he added.

Italy ended England's dream to win the Euro 2020 here at the Wembley Stadium on Sunday (local time). Azzurri defeated England 3-2 on penalties after the normal 90-minute action had finished at 1-1 and even extra time was not able to break the deadlock.

Marcus Rashford, Jadon Sancho, and Bukayo Saka all missed the chance to net goals in the penalty shootouts. The English players were then abused on social media.

The British Prime Minister said England players "deserve" to be lauded for their heroics and shouldn't be "racially abused" on social media.