His Majesty leaves Saudi Arabia after a two-day official visit 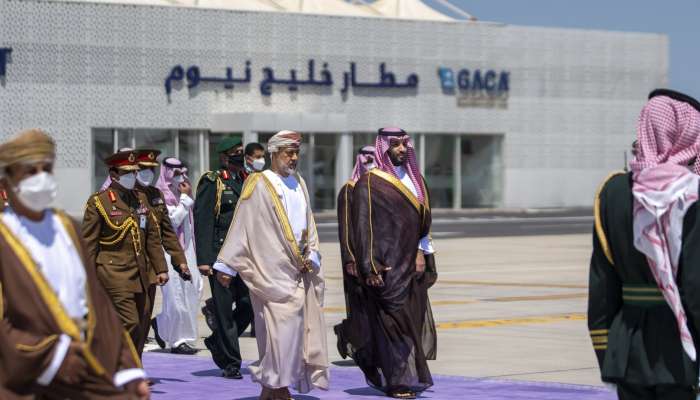 Muscat:  His Majesty Sultan Haitham Bin Tarik left Neom city on Monday after a two-day state visit to the Kingdom of Saudi Arabia (KSA) during which he met with the Custodian of the Two Holy Mosques King Salman bin Abdulaziz Al-Saud of the KSA.

His Majesty was seen of at the Neom Bay Airport by Prince Mohammed bin Salman Al-Saud, Crown Prince, Deputy Prime Minister and Minister of Defence, Prince Abdulaziz bin Saud Al-Saud, Minister of Interior (Head of Mission of Honour), Abdullah bin Saud Al-Anzi, Saudi Ambassador to the Sultanate, members of the Mission of Honour, a number of Saudi senior officials, and members of the Sultanate’s Embassy in the Kingdom.

While leaving Neom city, His Majesty Sultan Haitham Bin Tarik sent a cable of thanks to the Custodian of the Two Holy Mosques, King Salman bin Abdulaziz Al-Saud.

In the cable, His Majesty the Sultan expressed his heartfelt appreciation for the hospitality accorded to him and his delegation.

His Majesty the Sultan lauded the outcome of the visit, notably the talks, joint meetings and agreements which, he said will have a positive impact on consolidating the deep-rooted historical ties. This, His Majesty affirmed, will bring about plenty of benefits to the peoples of the two countries.

His Majesty the Sultan prayed to the Almighty Allah to grant King Salman continued good health. He wished that the people of Saudi Arabia would enjoy further progress and prosperity under the wise leadership of the Custodian of the Two Holy Mosques.