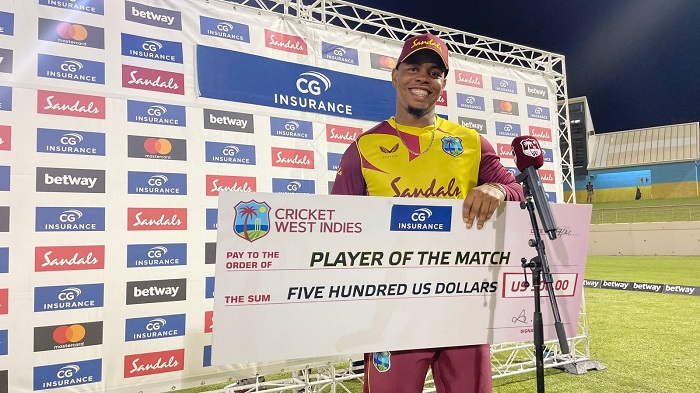 Hetmyer was the sheet anchor with four sixes and two boundaries

With this win, West Indies have taken a 2-0 lead in the five-match T20I series. West Indies scored 196/4 in the allotted 20 overs and then bundled Australia out for 140 in the second T20I. Hetmyer showed his immense class and skill as he produced a top-quality match-winning knock. The left-hander top-scored with 61 off 36 balls and Dwayne Bravo contributed an immeasurable unbeaten 47 not out as the home team seal a comprehensive victory.

Chasing 197, Australia got off to the worst possible start as they lost openers Matthew Wade and Aaron Finch inside four overs.

While Mitchell Marsh struck his second half-century in as many matches with a steady 54, a batting collapse meant the visitors were bowled out for 140 in 19.2.

After Marsh's wicket, West Indies bowlers ran through Australia to seal the game as eight visitors' batsmen got out without touching the double-figure mark.

For West Indies, after they were put in to bat first, Hetmyer was the sheet anchor with four sixes and two boundaries as he added a record 103-run partnership with Bravo, who had three sixes.

The left-hander and Russell added 24 off eight balls after Hetmyer was run out, as the West Indies added 123 runs in the last 10 overs to reach 196-4 on a good batting surface.