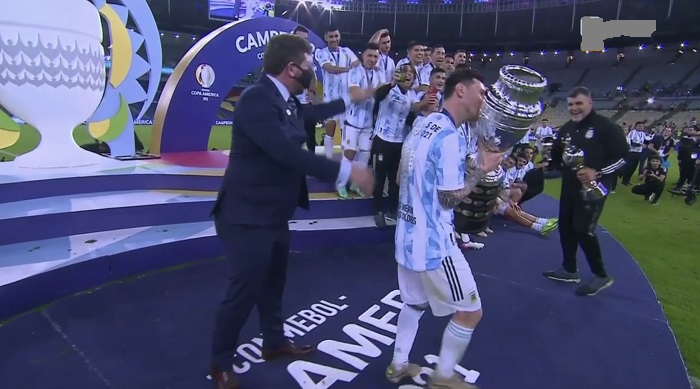 Rio de Janeiro: Angel Di Maria starred as Argentina clinched the Copa America final for the first time since 1993, registering a 1-0 win over Brazil at the Maracana on Saturday.

Maria's netted a goal in the 22nd minute to ensure Lionel Messi ended his drought of an international crown Argentina with Copa America final win. The final started off with both sides pressing hard for the goal in the early stages of the match. However, neither Brazil nor Argentina was able to get their foot on the ball.

In the 22nd minute, Angel Di Maria latched on to a ball over the top and capitalised on an error from Renan Lodi before lobbing Ederson Santana de Moraes to find the back of the net.

Maria netted the goal to put Argentina ahead. He became the first Argentina player to score in a Copa America final since Cesar Delgado in 2004.

In the 32nd minute, Lionel Messi ran past the Brazil defence only to find out the edge of the box. Meanwhile, Neymar tried to chip the football but wasn't able to find the desired result.

Maria's goal separated Brazil and Argentina at half-time in the Copa America final. In the second half, Richarlison have Brazil some relief as he fired the ball into the net but the goal was turned down due to offside.

Brazil kept pressing hard to find a goal and even forced Argentina to turn on a defensive mode but still wasn't able to find the net.

In the dying minutes of play, Brazil earned a corner with Neymar swinging a cross into the box, however, Thiago Silva glanced the header over the goal post. In the end, Argentina defeated Brazil 1-0 to lift the coveted trophy.