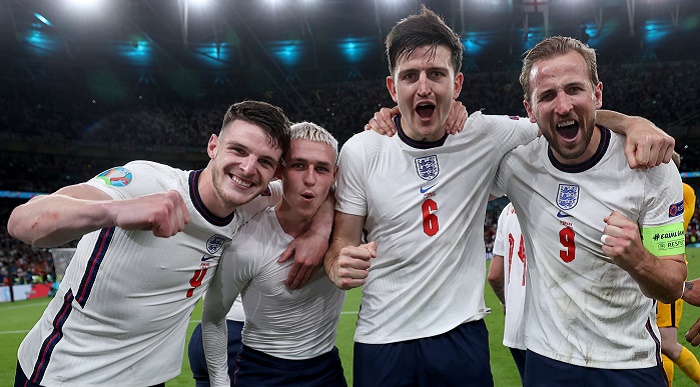 It’s been 55 years since England’s last triumph came on the world stage, when they won the World Cup in 1966, but the team’s supporters feel that home advantage in front of raucous supporters will provide them the incentive to go all the way on Sunday night.

Muscat: English nationals in Oman have only one message to deliver ahead of their country’s match against Italy in the final of Euro 2020: football is coming home.

It’s been 55 years since England’s last triumph came on the world stage, when they won the World Cup in 1966, but the team’s supporters feel that home advantage in front of raucous supporters will provide them the incentive to go all the way on Sunday night.

“A major final at home at Wembley, the home of football is where we deserve to be after a professionally-played tournament, but I do not think it is going to be easy tonight,” said Eliott Wright, a British national in Muscat. “The Italians are known to be notoriously difficult to beat, so it is going to be a hard-fought game that could go either way. Simply put, though, we have waited too long. Come on, England!”

Chuck Martini, a former goalkeeper for Premier League sides Leicester City and Tottenham Hotspur, currently heads the Muscat Football Academy in Oman. He too is confident that England’s shot at glory has come at last.

“I am really happy for England, it was a difficult game against Denmark in the semis, but Italy is going to be a tougher customer,” said Martini, who holds British nationality but represented Morocco at international level.

“Everyone says football is coming home, and I believe it is indeed going to come home.”

“The boys are playing really well, we will have a little bit more on the day to beat Italy,” he said. “We will bring the trophy home and the country is going to have a great party. I think the game is going to be won in normal time – I don’t see it going to extra time and penalties. I believe we will win 2-1.”

England needed a goal scored off the rebound of Harry Kane’s extra-time penalty to beat the Scandinavian side 2-1, and Martini admitted the Danes had played really well at the Euros.

“I felt the English had just that little bit more quality than Denmark, but I thought the Danish keeper Kasper Schmeichel had a terrific game.”

While ‘football’s coming home’ may be a very traditionally English chant, it has been hijacked by some Italian supporters, who feel instead that ‘football’s coming Rome’ – they fully expect their side to win at Wembley, in front of tens of thousands of England supporters.

Italy is one of international football’s most successful teams, having won four World Cups – the last came in 2006 – as well as the 1968 European Championships.

“Our team is very strong – it is composed of many seasoned veterans like Giorgio Chiellini and Leonardo Bonucci who have been its leaders for a long time now, as well as some younger players who are the future of our side, like Gianluigi Donnarumma and Federico Chiesa, so we have the right balance,” said Italian national Damiano Flisi, who works in Oman’s tourism sector.

He pointed to Italy’s semifinal win over Spain to highlight just how comfortable the team is when it comes to high-pressure situations. While his opposite number Jordi Alba was visibly tense ahead of Spain’s ill-fated penalty shootout, a grinning Giorgio Chiellini was constantly encouraging his players and went so far as to hug the Spanish defender as well. “This is a team that is really there for each other – the team spirit instilled by coach Roberto Mancini has been amazing,” said Flisi.

“I don’t think any country expected us to get this far: there were many others who were the favourites, but we were definitely not one of them. The English are going to be under too much pressure so that favours us in London.”

Barbara Alessi, another Italian in Muscat, said, “Wherever we are, we will always support our national team. I hope they are successful on Sunday.”

Chuck Martini, however, still has other ideas: “Football is not going to Rome, it is coming home,” he said, rather firmly.