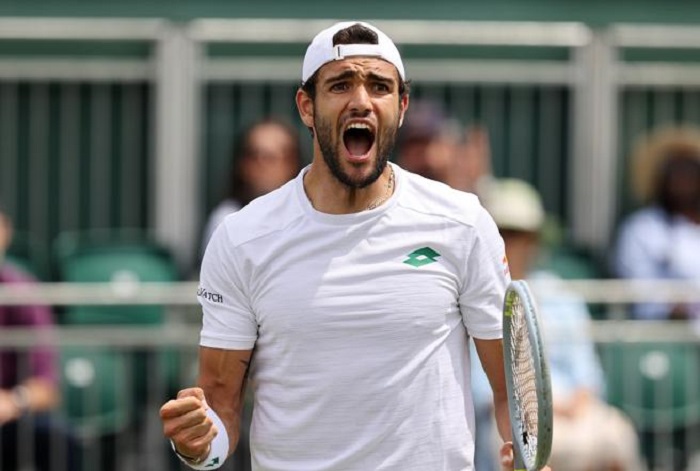 World No. 1 Novak Djokovic is one victory away from his 20th Grand Slam title as the Serbian beat Canadian Denis Shapovalov 7-6(3), 7-5, 7-5 in the men's singles semifinals at the Wimbledon Championships on Friday.

Hurkacz had defeated 39-year-old Roger Federer to storm into the semifinals of the ongoing Wimbledon on Wednesday but the Polish tennis player wasn't able to carry forward the momentum. When Berrettini led 6-3, 6-0 it appeared as though this meeting of first-time Wimbledon semi-finalists was going to be very one-sided.

From 2-3 in the opening set, Berrettini won 11 games in a row. The seventh seed, who also reached the 2019 US Open semi-finals, did not lose his serve across four sets and saved both of the breakpoints he faced on Centre Court

Djokovic, 34, had a game broken first in the opening set but was resilient enough to revenge the dropped points.

Shapovalov, 22, kept playing aggressively in the second set but was upset by the seasoned defending champion with a break in the 11th game.

"He was better for most of the second set, had a lot of opportunities and just didn't manage to close it out when he needed to," said Djokovic. "In important moments I think I probably held my nerves better than he did and just make him play an extra shot, make him do an unforced error, which was the case."

If Djokovic wins the final on Sunday, he will be not only a six-time Wimbledon champion but also a 20-time Grand Slam winner just as Roger Federer and Rafael Nadal.

"It would mean everything. That's why I'm here. That's why I'm playing. I imagined myself being in a position to fight for another Grand Slam trophy prior to coming to London. I put myself in a very good position," said Djokovic.

Berrettini, reaching a Grand Slam final for the first time, said he was quite confident ahead of the semifinals. "I knew that I could win the match. I think I played my best so far. So I'm really happy for my performance."