Phoenix rising from the ashes 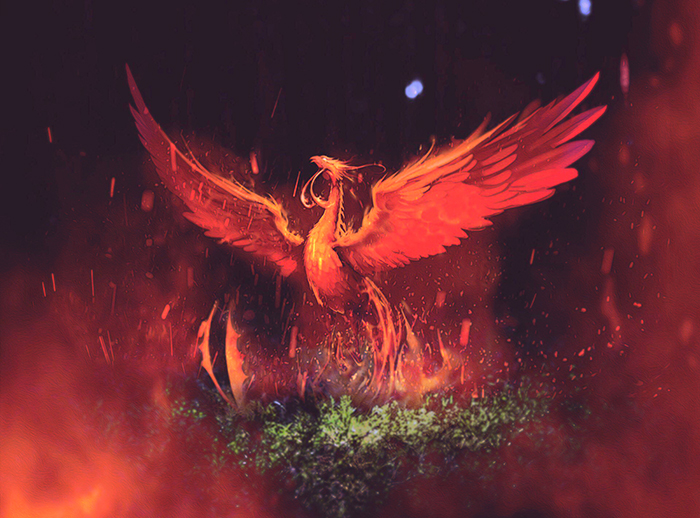 'Phoenix rising from the ashes.' This is a well-known phrase originating from 19th century ancient Egypt. The phoenix is a mythical bird with fiery plumage that lives up to 100 years. Near the end of its life, it settles in its nest of twigs which then burns ferociously, reducing the bird and the nest to ashes. And from those ashes, a fledgling phoenix rises – renewed and reborn.

This phrase can be metaphorically used to describe many of our lives. We go through hardships every now and then, in those moments when darkness descends, joy is bolted out, buried, seemingly non-existent. Everything weighs like a heavy burden, and our activities feel like an obligation.

But eventually, the fog disappears and you realise the dark clouds have moved on. With the help of friends and family, we look  with fresh eyes and a new determination.

It’s a part of the human experience. So many people in history, at the moment and even in the future will go through this. The setbacks that life continues to throw at you, they’ll never stop. What matters is how you react to them. Are you determined enough to keep going? Is your dream important enough that you keep working for it?

We all have goals and at one point, we all have gone through a time when we didn’t meet that goal at first. Let me share about some people who’ve risen from their ashes like phoenix, brighter and better than ever.

Whether you’ve read it or not, you’ve definitely heard of the iconic Harry Potter series. They are one of the most successful books of J.K Rowling. Rowling considered herself a failure before Harry Potter was published. She was jobless and penniless. She had a kid and she couldn’t take care of her as she had no money. And it was after her divorce that she finally started writing Harry Potter. It got rejected by 12 major publishing houses before Bloomsbury took it up in 1997. The rest is history.

Let’s not forget that the co-founder of Apple was fired from his own company.Steve Jobs rose like a phoenix after he was ousted from Apple. He then focused on Next and Pixar and then returned to Apple to take it over from where he left. In a commencement speech, Steve Jobs has mentioned that getting fired from Apple was the best thing that could have ever happened to him.

Another important person we can’t forget is Thomas Edison. The inventor failed 1,000 times while inventing the light bulb! He even gave the now famous quote - “I have not failed 10,000 times. I have not failed once. I have succeeded in proving that those 10,000 ways will not work.” Now, that’s how one should approach failure.

I’ve saved my personal favourite for last. She’s one of the most successful and influential singers of our time. She is Taylor Swift. Everyone knows the story of her downfall and the drama with the media back in 2016. The reason she’s on my list is because after watching 'Miss Americana', a documentary where she talks in details about how hard that year was for her, I realised she had definitely gone through one of the hardest things people could go through.

In 2017 she announced the release of her album titled 'Reputation' and critics were quick to say that it wouldn’t be a success and that tour would be “a flop”.  They were proved wrong when Billboard announced that Swift had broken the record for the highest-grossing U.S. tour in history, even beating the Rolling Stones’ 2005-2007 tour.

She made history this year and is now the fourth artist — and the first woman ever — to win the album of year Grammy three times.  Last month she was awarded with the global icon award at the Brits.

All these people teach us incredible things and are examples of how when life feels like the worst and seems as if you’ll never smile again, just around the corner are some of the greatest things.

What seems like the ending turns out to be a beginning to something you never imagine. These are four among millions of people who’ve gone through the worst of times and risen from their ashes.

J.K Rowling shows us that even at her lowest she rose because she might have been penniless but she still had herself. All she needed was her creativity and talent of writing. Despite getting rejected by some of the best publishing houses, she never gave up.

Steve Jobs’ story proves that even if the worst thing happens it isn’t the end. You can keep working on it and if you’re determined, anything is possible. He highlights the importance of turning your failures into success.

Thomas Edison shows that the worst thing you can do is give up. He failed millions of time but just imagine if he had given up after his first attempt, we might not have the light bulbs we have today.

Taylor swift says that one thing she learnt form that year was that life is unpredictable, people can make forecasts and they can make predictions but at the end of the day that doesn’t matter. You’re the one that gets to decide how everything is actually going to turn out because you’re in charge of your own life. It’s up to you if that obstacle will be the end of you or an opportunity for you to get up and try harder.

Life will knock you down continuously; the key is to keep getting up and working harder than before. It’s important to know that when it seems like nothing’s ever going to be right again, something great is just around the corner waiting for you. Waiting for you to work towards it. Sometimes life gets stressful and it’s completely okay to take a break for a while, just as long as you’re back up once again. “In order to rise from its own ashes, a phoenix must first burn."