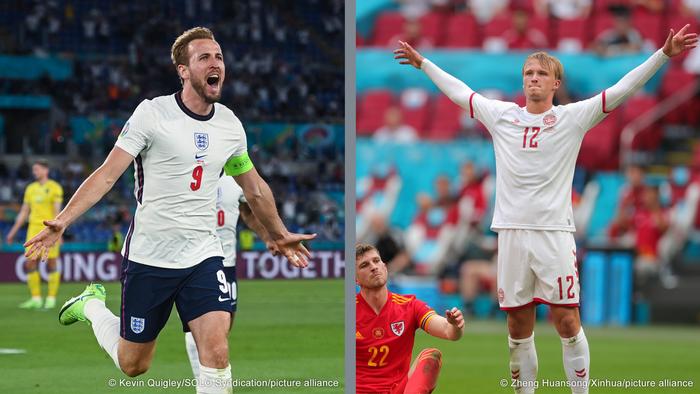 England have been one of the most impressive sides at Euro 2020.

How England got here


After a pedestrian group stage, England have been one of the most impressive sides at Euro 2020.

Gareth Southgate's side won Group D despite scoring just two goals, recording two victories against Croatia and the Czech Republic and a draw against Scotland. Both goals were scored by Raheem Sterling, who appears to have been finally embraced by his own country after years of criticism surrounding his national team performances.

The group victory set up a date with Germany, a team they don't normally beat at major tournaments, in the round of 16. But the Three Lions prevailed this time, a 2-0 win that brought an end to Germany's Joachim Löw era.

England then doubled their tournament goal total in a 4-0 quarterfinal win against Andriy Shevchenko's Ukraine. In the victory, Southgate's team became the first to not concede in the first five games at a European championship.


A day after the announcement that he would move to Manchester United, Jadon Sancho finally made his first start at Euro 2020.

The former Borussia Dortmund forward's absence in Southgate's side had been perplexing given his success in Germany: He had 50 goals and 64 assists in 137 games in Dortmund. The 21-year-old had seen the likes of Jack Grealish, Marcus Rashford and Bukayo Saka get minutes ahead of him.

But Southgate finally gave Sancho his shot, playing him on the right of a front three with Sterling and captain Harry Kane. But the English forward didn't exactly impress in his debut start aside from a few flashes reminiscent of his Dortmund days.

With several strong attackers in Southgate's stable, the jury is out as to whether Sancho will crack the starting lineup against Denmark.

How Denmark got here


As inspirational stories go, this Danish team has put together a good one, and most neutrals are hoping it has a happy ending.

Christian Eriksen's collapse in the first half of Denmark's first group game against Finland — later revealed to be cardiac arrest — understandably shook the team. Following the incident, the Danes lost 1-0 to Finland and 2-1 to Belgium in their next game. But a 4-1 victory over Russia in their final group game saw them qualify for the knockout stages.

A 4-0 win over Wales followed, which made Kasper Hjulmand's side one of the few to score at least four goals in consecutive games at a European championship. Denmark then beat the Czech Republic 2-1 in the quarterfinals, a victory which included an early strike from Borussia Dortmund's Thomas Delaney.

The Danes are now set to participate in the semifinals for the first time since Euro '92, their only tournament victory.


The current England and Denmark sides should be rather familiar with each other. The two squared off twice in the UEFA Nations League in September and October 2020, which resulted in a 0-0 draw and a 1-0 Denmark win.

England have won 12 of the 21 games in the matchup, though half the victories came before 1980. Denmark has won just four in the fixture, and there have been five draws.


Both teams have enjoyed a strong home support as host nations. England have played all but one of their five games during Euro 2020 at London's Wembley Stadium, while Denmark played all three of their group stage games at the Parken Stadium in Copenhagen.

With the semifinals and final to take place at Wembley, England stand to gain the most from home support. That's also due to quarantine rules for visitors to the United Kingdom, which even apply to those who are vaccinated against COVID-19. As with many national teams playing in Britain, Denmark will therefore have to rely on fans who already live in the UK.

Wembley's stadium capacity is also set to increase to up to 60,000 spectators for the semifinals and final, another factor that will likely benefit England.

The number of spectators at tournament games has been a source of outrage among EU lawmakers. German Chancellor Angela Merkel said during a trip to the UK recently that she was "worried and skeptical" about high attendances at matches.