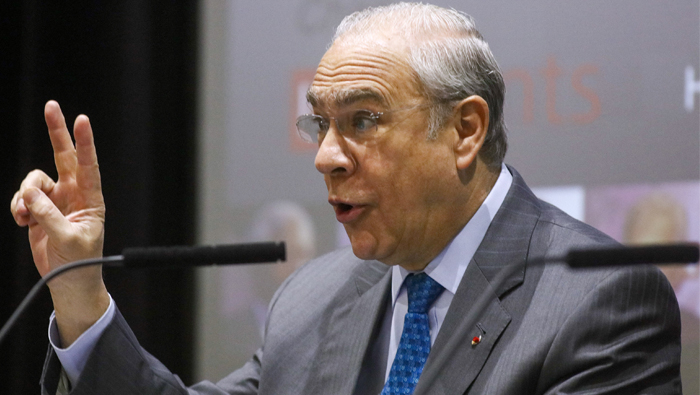 Paris: Organisation for Economic Cooperation and Development (OECD) secretary-general Angel Gurria says the global economic recovery won’t pick up this year and will improve only slightly in 2017 as trade fails to revive.
The world economy will expand 3 per cent in 2016, the same pace as last year, and will only improve ‘a little’ next year, Gurria said in an interview with Bloomberg Television in Paris. “Overall a rather mediocre, a rather dismal outlook,” the OECD chief said. “Trade is growing at 2 to 3 per cent; it should be growing at 7.”
The remarks underline the lacklustre growth as many emerging markets struggle with a slump in commodity prices and rich economies such as Europe and the United States fail to return to the sort of performance they typically had before the global financial crisis in 2008. The Paris-based OECD releases its semi-annual Economic Outlook at 10.30 Paris time on Wednesday.
Gurria warned UK voters that opting to leave the European Union in a referendum June 23 will penalise the country economically, wiping the rough equivalent of a month’s wages off potential incomes, according to OECD calculations.
Brexit is “a threat, but mostly it’s a threat to the well-being of the UK,” Gurria said. “It’s like a tax” but one “for which you get nothing in return.”
The global economy is slipping into a self-fulfilling ‘low-growth trap’ where ultra-loose monetary policy risks doing more harm than good, the OECD warned.
In a highly critical editorial in the OECD’s latest ‘Economic Outlook’, rich world governments bear the brunt of the blame for failing to revive demand and failing overhaul their economies in the wake of the financial crisis in 2008.
According to the Paris-based group, which advises its 34 member countries, too much of the burden of lifting growth has been left to central banks. After pushing interest rates below zero and pumping money into their economies through asset purchases, they are starting to see diminishing returns and their actions could even generate financial-market volatility.
“Monetary policy has been the main tool, used alone for too long,” OECD chief economist Catherine Mann said in the semi-annual report released on Wednesday. “In trying to revive economic growth alone, with little help from fiscal or structural policies, the balance of benefits-to-risks is tipping.”
Mann also said that “negative feedback loops are at work.” Lack of demand, global uncertainties and slow reform progress are deterring investment, while trade growth remains too weak, she said.
Growing distortions
“Monetary policy cannot revive near and long-term growth by itself, and distortions are increasing,” the OECD said. Ultra-low and negative rates have stressed bank profitability and created financial strains for pension funds and insurers, while becoming “less potent” in stimulating consumption, it said.
“Fiscal policy must be deployed more extensively and can take advantage of the environment created by monetary policy,” Mann said in her editorial introducing the report. “Governments today can lock in very low interest rates for very long maturities to effectively open up fiscal space.”
The OECD’s message echoes the mantra of European Central Bank (ECB) president Mario Draghi, who has long called for governments to do more to stimulate growth. After the ECB’s April policy meeting, he said that “in order to reap the full benefits from our monetary policy measures, other policy areas must contribute much more decisively.”
US outlook
While the OECD left its global growth forecast unchanged, it cut its 2016 projections for growth in the United States and Japan, while lifting the euro area.
US gross domestic product is now expected to expand 1.8 per cent this year instead of the 2 per cent predicted in February. The 2017 forecast is unchanged at 2.2 per cent.
In the US, “growth hit a soft patch at the turn of the year,” the OECD said. The Federal Reserve’s gradual policy will leave interest rates “supportive throughout the projection, which is broadly appropriate” given weakening inflationary pressures and ongoing weakness in global demand.
Euro-area 2016 growth was revised up to 1.6 per cent from 1.4 per cent, while next year’s estimate was maintained at 1.7 per cent. The OECD kept its China forecasts at 6.5 per cent this year and 6.2 per cent in 2017.
“The longer the global economy remains in the low-growth trap, the more difficult it will be to break the negative feedback loops, revive market forces and boost economies to the high-growth path,” Mann wrote. “As it is, a negative shock could tip the world back into another deep downturn.”