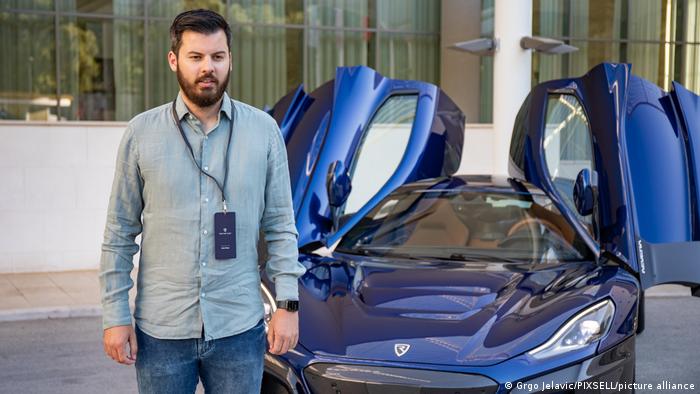 Paris: Croatian electric supercar specialist Rimac on Monday announced that it was acquiring a 55% controlling stake in Bugatti, a renowned old French performance motoring brand that's been a part of the VW empire since its 21st century resurrection.

The merger partners one of the world's highest-performance electric carmakers with the company producing the fastest petrol-powered road car on the planet.

According to Rimac, the two companies are "a perfect match for each other" and its new Bugatti Rimac joint venture with Porsche from the Volkswagen Group will "create a new automotive and technical powerhouse."

"I can’t begin to tell you how excited I am by the potential of these two incredible brands combining knowledge, technologies and values to create some truly special projects in the future," company founder Mate Rimac was quoted as saying.

No financial deals of the transaction were published. Porsche had already purchased a roughly one-quarter stake in Rimac in the run-up to the partnership's announcement.

"We are combining Bugatti's strong expertise in the hypercar business with Rimac's tremendous innovative strength in the highly promising field of electromobility," Oliver Blume, Chairman of the Executive Board at Porsche AG said. "Bugatti is contributing a tradition-rich brand, iconic products, a loyal customer base and a global dealer network to the joint venture. In addition to technology, Rimac is contributing new development and organizational approaches."

Who owns what after the merger?


Rimac will hold a 55% stake in Bugatti-Rimac, with 37% belonging to founder Mate Rimac. The Porsche division will retain a 24% stake, Hyundai will hold 12%, and other investors will hold the remaining 27%.

But according to Rimac's press release, the Croatian company will retain full ownership and control of a new company, called Rimac Technology, that will continue developing its drivetrains, batteries and other components for electric vehicles. Not unlike US giant Tesla, selling electric vehicle components to other carmakers is a core component of Rimac's business model, as the company currently only produces performance cars with hefty price tags for a small band of customers.

"Mate Rimac will lead the new company. As CEO of Rimac Group, he will run both Bugatti Rimac and the new division, Rimac Technology. Bugatti and Rimac will both continue as separate respective brands, retaining existing production facilities and distribution channels," Rimac said. "Bugatti Rimac represents the company that will develop the future of both Bugatti and Rimac vehicles, by joining resources and expertise in research and development, production, and other areas.

Bugatti manufacturing to remain in France


Bugatti cars will continued to be assembled in eastern France, where the company was first founded in 1909. To all intents and purposes, though, the VW Group revived the brand from the ashes around the turn of the century, developing and building first the Bugatti Veyron and then its successor the Chiron.

The extremely high-price, low-volume, research-intensive Bugatti production was likely always a losing venture for the VW Group, designed more to generate headlines and publicity than direct profits on models sold.

"In time, Bugatti Rimac's global headquarters will be situated at the recently announced Rimac Campus, also serving as the home of Rimac Technology," Rimac said, of a facility currently scheduled to open in 2023 on the outskirts of Zagreb.