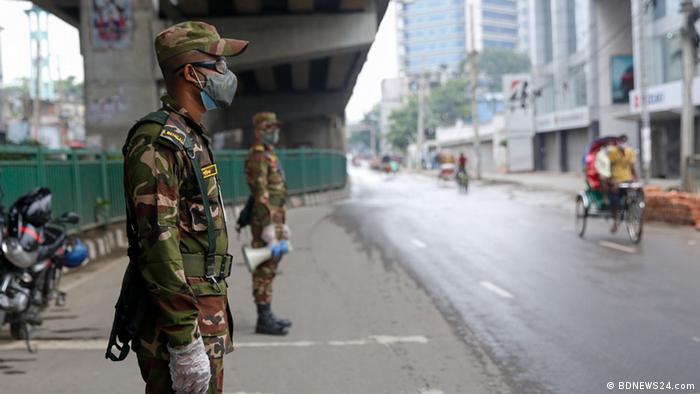 Dhaka: Bangladesh has been witnessing an alarming rise in coronavirus cases over the past several days, prompting the government to deploy the military to the nation's streets to ensure that people stay indoors and don't violate lockdown restrictions.

The surge in the South Asian country's COVID infections is blamed largely on the highly infectious delta variant first detected in India.

Hospitals are struggling to cope with the growing number of patients, particularly in areas bordering India. Some rural towns have recorded infection rates of about 70%, underlining the magnitude of the problem facing the health system.

Bangladesh has so far reported nearly 950,000 infections and more than 15,000 related deaths. But observers say that's a huge undercount and stress that the real caseload could be three to four times higher.

On Monday, the country reported 164 new COVID-19 deaths, its biggest daily rise since the pandemic began. It also registered the highest-ever number of new daily infections at 9,964.


As per the government's lockdown rules imposed at the start of the month, and now extended until July 14, Bangladeshis can only leave home in case of emergencies and to buy essentials.

The army and police have been patrolling mostly empty streets in the capital, Dhaka, and other major cities. Authorities have also shut down public transport and most shops. Stores that sell essential items can open for a few hours a day. Furthermore, large social gatherings have been banned in a bid to restrict people's movement.

"We have called upon the people to stay indoors to help improve the situation. Those who go out of their homes without a valid reason will face legal action," Mahtab Uddin, a police officer in Dhaka, told the AFP news agency.

"The prime target is to ensure social distancing, not to punish or fine anyone," he said.

Nevertheless, over 2,000 people have been detained over the past few days on charges of violating the lockdown rules, according to local media reports.

Despite the curbs on public transport, there was an exodus of migrant workers, with tens of thousands of them leaving the capital Dhaka and other large cities and moving to their home villages.

Emergence of a hotspot


The southwestern city of Khulna has emerged as a major virus hotspot over the past few days.

Many of the affected families in the region report of a shortage of oxygen cylinders and hospital beds. And the death toll continues to rise, with reports suggesting that graveyards could not cope with the huge number of dead.

On Thursday, Khulna city recorded 46 virus deaths, according to an official count, while in earlier waves the daily death toll never went into double figures.

Most people in the city believe the real toll could be much higher.