We've got to give Denmark respect, says Jordan Henderson before semis clash 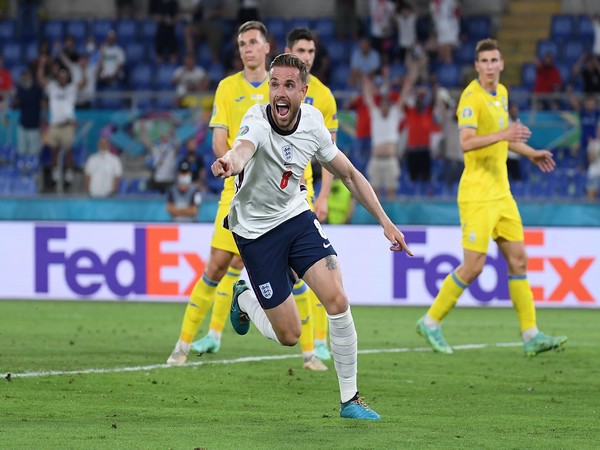 Rome: Jordan Henderson showered praise upon England's side after their dominating win over Ukraine in the quarter-finals of the ongoing Euro 2020 but has cautioned the Three Lions not to get ahead of themselves before their semi-final with Denmark at the Wembley Stadium on Wednesday.

The Liverpool captain notched his first senior goal as Harry Kane scored a brace and a Harry Maguire's header helped Gareth Southgate's men to thrash Ukraine 4-0 in the last 8 here at the Stadio Olimpico on Saturday. "I thought the lads were outstanding, so, yeah, overall a great night," the midfielder, who came off the bench for Declan Rice in the second half, told Sky Sports. "You know, we haven't achieved, we need to quickly turn focus, and use it in a positive way, to Wednesday and a tough opponent against Denmark.

"We've got momentum and we're feeling confident but at the same time, we've got to give Denmark respect because they're a fantastic team. We played them not long ago and we know how difficult that will be."

England had lost the semifinals of the 2018 FIFA World Cup against Croatia and now three years later, they would be playing another semifinal of a major tournament.

England got off the blocks quickly as Harry Kane made no mistake in converting a lovely cross from Raheem Sterling into a goal in just the 4th minute of the game. After that, no more goals were scored in the first half, and as a result, the Three Lions went into the interval with a 1-0 lead.

In the second half, England displayed its A-game and managed to score three more goals to eventually win the match 4-0.

First, Jordon Henderson netted the ball into the goalpost in the 46th minute and four minutes later, Kane scored again to give England a 3-0 lead, leaving Ukraine search for all kinds of answers. The final nail in the coffin for Ukraine came in the 63rd minute as Henderson got among the goal-scoring charts and in the end, England walked away with a 4-0 win.