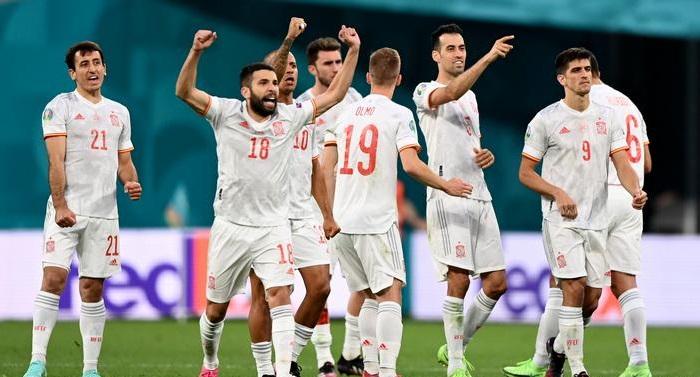 MADRID: Spain's national football team flew to London on Monday ahead of their European Championship semifinal against Italy on Tuesday night.

The need to protect the playing surface at Wembley Stadium means the Spanish, who enjoyed a day off on Sunday, will hold their final training session ahead of the game at the familiar headquarters of the Spanish Football Federation (RFEF) in Madrid.

Spain have reached the last four after testing the nerves of their fans (and no doubt coach Luis Enrique) as they needed extra-time to beat Croatia 5-3 in the last 16, while their quarterfinal against Switzerland went to a penalty shootout in which goalkeeper Unai Simon was the hero.

Consecutive extra-times mean Spain have played an hour more than Italy over their last two games and the general feeling is that Luis Enrique's players will need a good night in front of goal if they are to get past the Italians.

Nevertheless, Spain have lost just two of their last 14 meetings against Italy and they still remember their quarterfinal win against Italy on the way to the 2008 European Championship title, which truly marked their arrival as a top team and started a run of success which saw them win the 2010 World Cup and Euro 2012, where they thrashed Italy 4-0 in the final.

However, the current Italian side is very different from the ultra-defensive teams of the past, with Roberto Mancini building a team based on pace in attack and drive in midfield.

He has lost left-back Leonardo Spinazzola to injury, whose pace down the flank will be missed, although Ciro Immobile, Lorenzo Insigne and Nicola Barella all pose massive threats to a Spain side that always look as if they have a defensive error in them.

Pablo Sarabia is likely to miss out for Spain with a muscle problem, with Dani Olmo or Thiago Alcantara stepping in for a game where Spain will hope their control of midfield, rather than tired legs, will be the key factor.