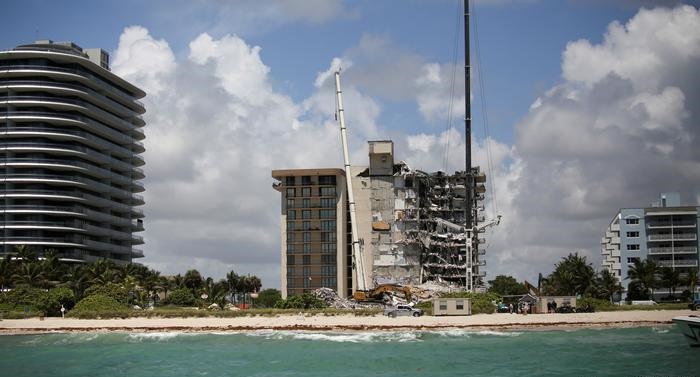 Two more victims were found in the rubble on Friday after the Surfside condominium collapse in Florida, bringing the death toll to 22.

The 12-story Champlain Towers South apartment block on Florida's coast near Miami partially collapsed on June 24 in a matter of seconds as residents slept.

On Thursday night, rescuers recovered the bodies of two victims, including the 7-year-old daughter of a Miami firefighter, officials said.

The number of people unaccounted for fell from 145 to 126 after duplicate names were eliminated and some of the feared missing were reported to have turned up safe, officials said.

No survivors have been pulled alive from the ruins since the first few hours after the collapse.

The rise in the number of victims came as authorities prepare for the demolition of the part of the building that still stands.


The city of North Miami Beach on Friday ordered the evacuation of another condominium after it was deemed unsafe.

"In an abundance of caution, the City ordered the building closed immediately and the residents evacuated for their protection, while a full structural assessment is conducted and next steps are determined,'' City Manager Arthur H. Sorey said in a statement.

The decision was also crucial as Hurricane Elsa approaches Florida.

"It's definitely not an easy decision," Sorey said. "It's just the right thing to do during these times. It's uncertain what's going to happen with the storm."


Miami-Dade assistant fire chief, Raide Jadallah, briefed relatives of the Surfside missing on Friday, saying that only one voice was heard during the entire search.

Jadallah said a woman's voice was detected until around 10 a.m. or 11 a.m. on the morning of the collapse, which happened around 1:30 a.m., and rescuers could not reach her.

"Most of the victims have been deceased in their bedroom indicating they were asleep," he said.

He also prepared the families for a possible suspension of the rescue mission as Hurricane Elsa approaches South Florida, making the Champlain Towers South rescue mission too dangerous.

The hurricane can approach South Florida as early as Monday, according to National Weather Service meteorologist Robert Molleda. But the storm's forecast path remains uncertain.