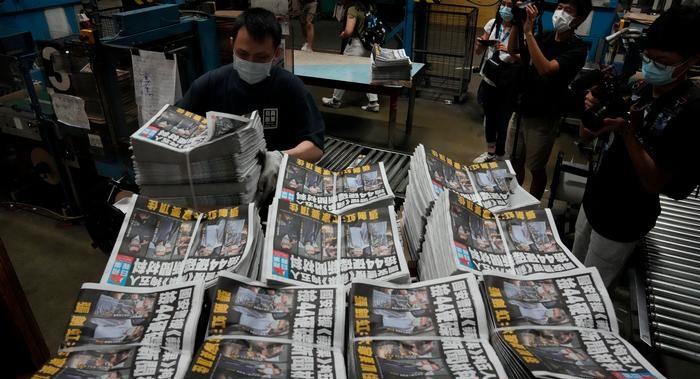 Hong Kong's pro-democracy newspaper Apple Daily is closing its print and digital edition on Saturday, publishing company Next Digital said in a statement on Wednesday.

Earlier on Wednesday, Hong Kong police carried out more arrests at Apple Daily, widening the scope of the operation against the tabloid.

Police announced the arrest of a 55-year-old man "on suspicion of colluding with foreign forces to endanger national security."

While a senior executive at Next Digital said a lead writer for editorials and a reporter had been arrested, a police representative told the media that there was no immediate information on a second arrest.

Police action against the paper was the first time the sweeping national security law had been used against journalists for something they had published, signalling an intensifying crackdown by authorities in Hong Kong.

How did it come to this?


Hundreds of police had raided Apple Daily last week in a national security probe in which senior executives of the newspaper were arrested over allegations of "collusion with a foreign country."

Five Apple Daily executives were arrested, making it the first time a new national security law was used to arrest top editors of a media agency.

Editor-in-chief Ryan Law Wai-kwong, chief operating officer (COO) as well as publisher Cheung Kim-hung, who is also CEO Next Digital, were among those arrested.

Authorities also froze Apple Daily's assets worth HK$18 million (roughly $2.3 million, or €1.9 million) under the national security law imposed on the Chinese-ruled city via Beijing in 2020.


The contentious security law broadened the definitions of crimes like secession, subversion, terrorism and collusion with foreign forces.

Critics say it was designed to stifle dissent and free speech in the semi-autonomous city.

The Apple Daily's sudden shutdown serves as a warning to all media outlets on the reach of a new national security law.

A European Union spokesperson slammed the shutdown of the paper as a crackdown on the free press.

"The closure of Apple Daily's Hong Kong operations clearly shows how the National Security Law imposed by Beijing is being used to stifle freedom of the press and the free expression ofopinions," Reuters quoted the unamed spokersperson as saying.

"Its closing seriously undermines media freedom and pluralism, which are essential for any open and free society. The erosion of press freedom is also counter to Hong Kong's aspirations as an international business hub."

The Apple Daily was founded in 1995 by billionaire mogul Jimmy Lai. Lai had left mainland China for Hong Kong as a young child. He made a fortune selling clothes and increasingly became more political following the Tiananmen Square protests in 1989. He later founded a media empire.