WTC final: Kohli, Pujara at the crease with thrilling finish on cards on Reserve Day 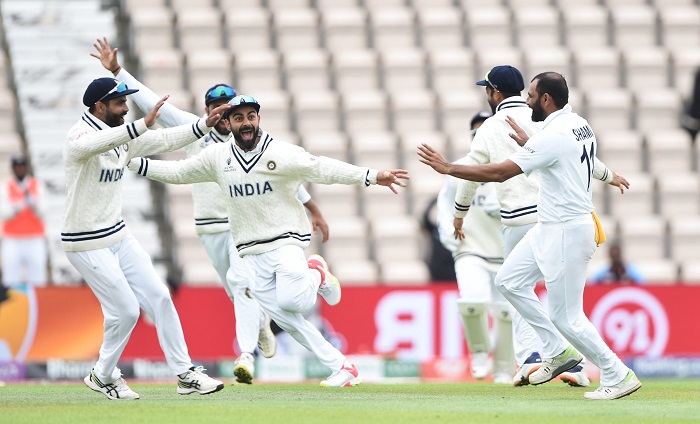 Mohammed Shami and Ishant Sharma provided India a momentum before Ravichandran Ashwin removed Neil Wagner at the cusp of the tea.

Southampton : Skipper Virat Kohli and Cheteshwar Pujara ensured there were no further hiccups in the third session on Tuesday as the ongoing World Test Championship (WTC) final moved to the reserve day to decide the winner of the summit clash.

India finished the fifth day of the WTC final at 64/2 with the winner of the high-octane clash to be decided on Wednesday (reserve day). Tim Southee claimed the wickets of the Indian openers in the third and final of the fifth day of the WTC final against New Zealand. India have taken a lead of 32 with Kohli and Pujara unbeaten at 8 and 12 respectively. The duo will start the proceedings on Wednesday.

In the third session on Tuesday, Rohit Sharma got India off the mark as he played with soft hands for three runs. It was a slow start for India as the side scored 24 in the 1o overs.

Tim Southee provided New Zealand with the breakthrough as he trapped Shubman Gill in front of the stumps for 8. Gill became Southee's 600th international wicket.

In the second session, New Zealand were bundled out for 249 in the first innings on Tuesday.

Mohammed Shami and Ishant Sharma provided India a momentum before Ravichandran Ashwin removed Neil Wagner at the cusp of the tea as the Kiwis extended their lead before being bowled out for 249.

India were on top after the first session on Tuesday but New Zealand fought back to take a crucial first-innings lead.

Southee and Trent Boult did frustrate the Indian bowlers, however, Ravindra Jadeja did the honours as he dismissed Southee to bundle out New Zealand for 249.

In the first session, Shami had scalped two while Ishant picked one wicket to put the Kiwis in a spot of bother at 135/5.