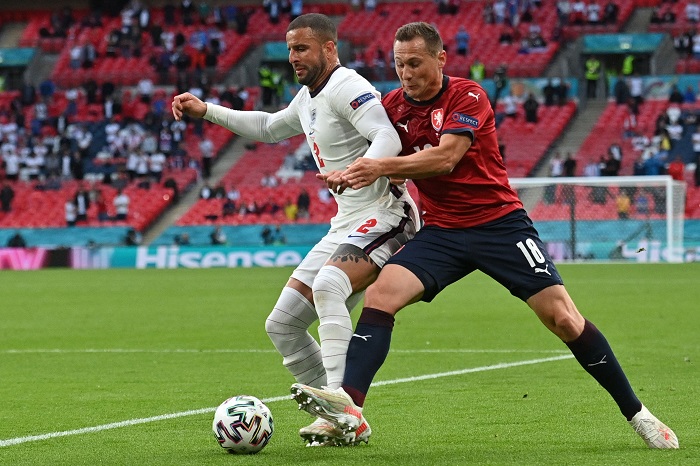 The clash between England and the Czechs was to decide the winners of the group as both teams have already assured a place in the last 16 into the match.

Seville: England clinched the top spot of Group D at Euro 2020 with a 1-0 win over the Czech Republic on Tuesday, while Luka Modric saved Croatia with a sensational goal and an assist in their 3-1 victory over Scotland.

Thus Croatia also reached the last 16 as the runners-up of the group and the Czech Republic, despite the defeat to England, still advanced to the knock-out stages as one of the four best third-placed teams.

The clash between England and the Czechs was to decide the winners of the group as both teams have already assured a place in the last 16 into the match.

Aston Villa playmaker Jack Grealish and Arsenal teenager Bukayo Saka started for England and Manchester United defender Harry Maguire was back to the starting line-up after recovering from injury.

The Three Lions dominated the pitch since the start with Raheem Sterling hit the woodwork after two minutes.

Ten minutes later, Grealish shot a fine cross into the box with Sterling jumping behind Saka to head home from close range.

"I thought it was a much better performance, attacking-wise," said the Manchester City striker Sterling after the match. "I thought we had more fluid movement and we created some problems as well. Most importantly, we scored the goal we needed and kept a clean sheet."

Sterling also scored the only goal in England's 1-0 win over Croatia in the first round on June 13.

The Czech Republic led the group after two matches with an advantage of goal difference, but their center forward Patrik Schick who scored three times in the first two matches failed to show his power in front of England's defense.

The Czechs made a few threats through counter-attacks and their best chance in the first half was Tomas Holes' long shot from the middle but was palmed away by England goalkeeper Jordan Pickford.

The second half was comparatively dull. Both teams made several changes but no one could change the scoreline.

England will wait to host the second-placed team in Group F at Wembley one week later. Their next opponents could be Portugal, France, Germany or Hungary.

In Glasgow, midfield master Modric struck a stunning second-half goal, before setting up another for Ivan Perisic to help Croatia beat Scotland 3-1.

The magic of the former world player of the year came in the 62nd minute when he got the ball just outside of the penalty area and fired it to the top corner with his right foot to put the Croatians in front again.

"I'd like to congratulate my team for a great match, we controlled the game very well," said Croatia coach Zlatko Dalic.

"We let the opponents back into the game with mistakes but we managed to relax and knew we would get the second goal and then the third."

Scotland, chasing for their knock-out stage debut at the tournament, were without Billy Gilmore with Stuart Armstrong coming in for the midfielder, who has tested positive for COVID-19 in Steve Clarke's only change to the side that drew with England on Friday night.

The Scots looked to impose a high pace on the game to stop the Croatians from settling on the ball, but the visiting side soon gained control of the match and started to ping the ball around the pitch.

Croatia took the lead in the 17th minute when the impressive Perisic nodded a cross-back for Nikola Vlasic to put his side ahead.

The Croatians continued to control the ball, moving it around comfortably, with Perisic a constant threat down their left flank.

However, the Scots never let their heads drop for a moment and just when Croatia were starting to look comfortable, they equalized just before halftime. Croatian defender, Dejan Lovren failed to clear an Andy Robertson cross in the 42nd minute, the ball fell to Callum McGregor, who thumped it home from outside of the penalty area.

But the second half saw Modric, at the age of 35, lead the Croatian to victory.

"That's what you're up against at this level - it was a tough lesson," McGregor said after the match.

The Real Madrid star's corner was headed in by Perisic 13 minutes from time, after his stunning finish earlier, to seal the match for Croatia.

Next up for Croatia will be the second-placed team from Group E, which might be Spain, Sweden, Slovakia or Poland.