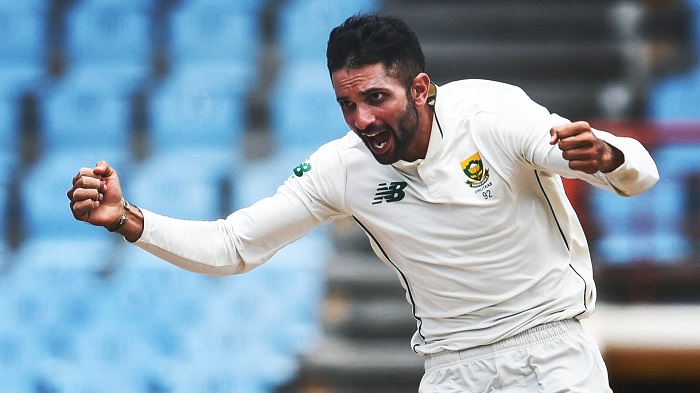 A five-wicket haul and hat-trick from Keshav Maharaj.

Gros Islet : A second-ever, Test hat-trick by a South African taken by Keshav Maharaj, helped the Proteas seal a 2-0 series sweep when they beat the West Indies by 158 runs with a day and session to spare at the Daren Sammy Cricket Ground on Monday.


On a magical day for the left-arm spinner, he closed with his seventh Test five-wicket haul as the visitors claimed their first Test series win away from home since 2017 against New Zealand. The home side was bowled out for 165 in their chase of 324 to win. In a more stable start, they slipped from 90/2 before lunch to 107/6 after the first session thanks to Kagiso Rabada, who returned figures of 3/44 in his dismantling of the top order.


Maharaj's magic beat off the middle order and tail, with Lungi Ngidi (1/29) chipping in with a scalp of his own - Jermaine Blackwood for 25.


The Windies will be kicking themselves regarding the manner in which their wickets fell, particularly those of their top scorers, Kieran Powell (51) and Kyle Mayers (34).


Roston Chase did not bat due to a quadriceps injury.


For West Indies, Kieran Powell top-scored as he played a knock of 51 runs from 116 balls while Kyle Mayers also played an innings of 34 runs.