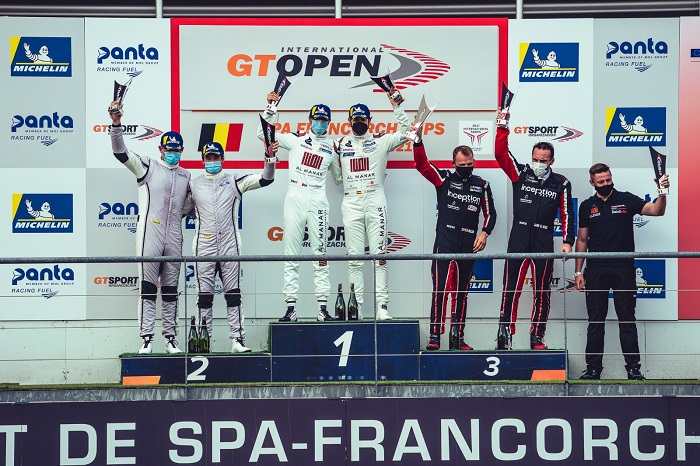 Al-Zubair managed to overhaul Brendan Iribe’s McLaren with around 20 minutes of the race to run to snatch a stunning victory.

The Lechner Racing Team Porsche 911 GT3 R began the first of the weekend’s races from second place on the qualifying grid and Al-Zubair managed to overhaul Brendan Iribe’s McLaren with around 20 minutes of the race to run to snatch a stunning victory.

In dry and sunny conditions, the 23-year-old Omani opened up a gap of over five seconds with 17 minutes of the race to run. Robbie Foley managed to pass Iribe in the TF Sport Aston Martin GT3 and claim second place with 14 minutes on the clock but Al-Zubair had extended the Lechner Racing Porsche’s advantage to over nine seconds heading into the final 10 minutes.

Al-Zubair held on over the closing laps to pass the chequered flag 7.181 seconds in front of Foley, with Iribe finishing third in the Inception Racing McLaren after the 24-lap race.

Al-Zubair said: “This was a dream result. Honestly I could not be happier. The second race weekend and we come up with an overall win. The car felt great and Andy did a superb job of putting it second in qualifying. There were no complaints. From the start of the weekend until now was just a build up for this. A first overall win in Europe…I am very happy with it.”

Yuki Nemoto brought the Vincenzo Sospriri Racing Lamborghini home in fourth place to keep his and Baptise Moulin’s title challenge alive. Michele Beretta (Lamborghini) and Adam Carroll (Audi R8) were fifth and sixth after Loris Spinelli (Mercedes AMG) slipped down the leader board to eighth in the closing minutes.

Soucek qualified the Porsche on pole in the Pro category for the first of the weekend’s two races and second on the entire grid behind the McLaren of Iribe and Ollie Millroy. A lap of 2min 17.235sec was sufficient to claim the spot ahead of the Schandorff/Beretta Lamborghini and the Aston of Michael Dinan and Foley.

Al-Zubair and Soucek enjoyed a solid first practice session on Friday. They were classified fourth in the entire field and first in the Pro class after running for 19 laps and posting a best tour of 2min 19.176sec.

The duo faired even better in the second practice session and a best tour of 2min 19.377sec put them in second place in the entire field and again on top in the Pro class and nearly 1.4 seconds faster than the VSR Lamborghini crew of Frederick Schandorff/Michele Beretta.