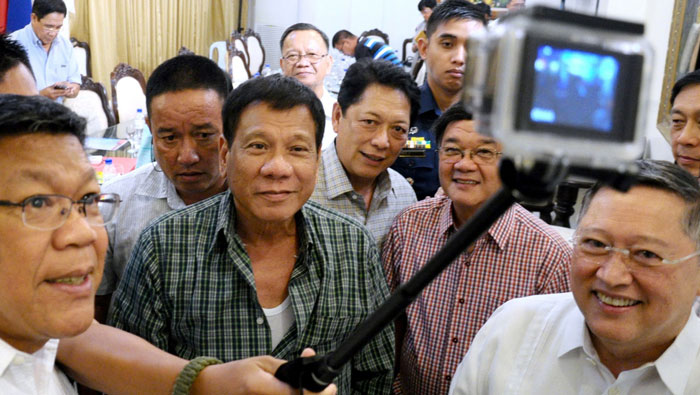 Davao City: Philippines President-elect Rodrigo Duterte said on Tuesday his country would not rely on long-term security ally the United States, signalling greater independence from Washington in dealing with China and the disputed South China Sea.
The Philippines has traditionally been one of Washington's staunchest supporters in its stand-off with Beijing over the South China Sea, a vital trade route where China has built artificial islands, airstrips and other military facilities.
Duterte, the tough-talking mayor of Davao City who swept to victory in a May 9 election, has backed multilateral talks to settle rows over the South China Sea that would include the United States, Japan and Australia as well as claimant nations.
He has also called on China, which claims most of the sea, to respect the 200 nautical mile Exclusive Economic Zone granted to coastal states under international law.
Asked by reporters if he would push for bilateral talks with China, Duterte replied: "We have this pact with the West, but I want everybody to know that we will be charting a course of our own.
"It will not be dependent on America. And it will be a line that is not intended to please anybody but the Filipino interest."
Duterte was unveiling his cabinet line-up a day after a joint session of Congress declared him the election winner. He formally takes over as president on June 30.
Key ministerial appointments went mainly to conventional choices, a decision likely to allay nerves among foreign and domestic investors about a lurch away from reforms that have generated robust economic growth.
They also may point to a bid to resolve differences over the South China Sea.
The Philippines, Brunei, Vietnam, Malaysia and Taiwan have overlapping claims to waters rich in oil and gas and through which trillions of dollars' worth of trade pass each year.
Duterte's pick for foreign secretary, Perfecto Yasay, has sounded a conciliatory note.
"I don't think that there is another way of resolving this dispute except talking to each other," Yasay told reporters this week. "We certainly would like to make sure that we are able to resume bilateral talks because these are necessary."
Muddying the picture somewhat was the choice of Nicanor Faeldon, a former marine who led a coup bid about a decade ago, as head of the customs bureau, the country's second-largest agency in terms of revenue.
In December, Faeldon took a group of Filipino protesters to a disputed island in the South China Sea that is held by the Philippines, triggering an angry response from Beijing.
Before Duterte's election, the Philippines also took the dispute to the Permanent Court of Arbitration in The Hague, although China does not recognise the case. A ruling is expected in the coming weeks.
"I am waiting for the arbitration," Duterte said of the process, when asked about investment prospects with China.
"It will impact on us in so many fronts ... I would like to wait for this, then, with the advice of the cabinet, I might be able to proceed. But you know, I am not ready to go to war. It will just result in a massacre."
Duterte, 71, named a former school classmate, Carlos Dominguez, as finance minister, and an economics professor, Ernesto Pernia, as economic planning minister.
"I can assure you they are all men of integrity and honesty," Duterte said in Davao, where he was mayor for more than two decades before being elected president.
Dominguez, who was mining and farm minister in two previous governments, hails from a wealthy family that has interests in real estate and hotels, while the U.S.-educated Pernia is a former lead economist for the Asian Development Bank.
"We are very excited about this cabinet," said Perry Pe, president of the Management Association of the Philippines. "They will hit the ground running from the first day."
Duterte's defiance of political tradition has drawn comparisons with US Republican presidential candidate Donald Trump.
His "man-of-the-people" demeanour tapped into voters' disappointment at the ruling elite's failure to tackle poverty and inequality despite average economic growth of more than 6 percent under President Benigno Aquino.
Duterte condones execution-style killings of criminals, shudders at the thought of wearing a tie or socks, and has vowed not to work until after noon when he becomes president.
Some cabinet positions have yet to be announced, and two of the 21 jobs confirmed so far are women. When a female journalist asked a question at the briefing, Duterte wolf-whistled.