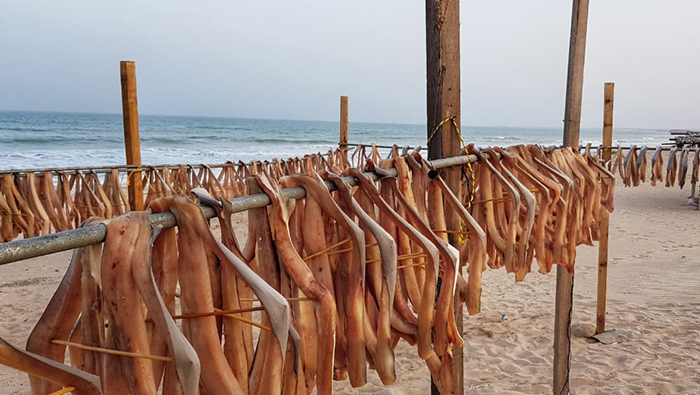 Muscat:  A popular species of kingfish that is dried and then eaten as a snack in Oman should be avoided, because it contains a high amount of bacteria and fungi, that could prove very harmful to people.

Commonly known as owal, the kingfish develops the microbes during the drying process, according to researchers at Sultan Qaboos University, who have asked people to be cautious while buying dried fish, and to make sure they only purchase their food from reputable fishmongers.

Tests were conducted to find out the extent of contamination, as well as discover solutions to make them better for human consumption. Samples of two fish (anchovies and kingfish) were sourced from two separate markets in Buraimi and Seeb.

The studies showed the presence of three types of bacteria: e.coli, staphylococcus aureus, and coliforms in anchovy sourced from both places.

The kingfish samples showed the presence of fungi in very small quantities while the anchovy brought from Buraimi had much more fungi than the ones bought from Seeb market.

“Dried fish also carries contamination through insects and sand, as well as high concentrations of ash, especially when the fish is dried on sand,” said the researchers. “The presence of microorganisms is another major factor affecting the quality of dried fish. Great concern has to be made when purchasing dried fish. We recommend drying fish under more hygienic conditions and to use solar dryers instead of direct drying methods practiced on beach sands.”

Nasir Al Ghanbosi, a fisherman from Al Ashkarah in South Al Sharqiyah, commenting on the study results, said, “This gives clear evidence that primary health concerns have not been taken into consideration during the preparation process. These include the quality of fish, the time and place of its drying, and proper storage and preparation. The emergence of these bacteria is not caused by the fish itself, but by the process of preparation and storage.”

He added that Omani fishermen had devised many ways, since ancient times, to preserve fish for commercial or private consumption. One of these methods is used in the drying of sharks and sardines, where the sharks are cut according to size, after which salt is placed on them, and then washed with sea water and dried using sunlight.

“We have followed this practice for several decades, and have heard of no harm caused by owal to people who eat it,” said Al Ghanbosi. “It was a favourite among us, because it was made by experts, who cared about the health of their customers.

They did not dry fish during the winter, because they knew this period was not suitable for drying, and so maintained their quality by preserving them with salt.

“They did not dry fish except during the dry months,” he added. “Our ancestors and our parents had enough experience in dealing with this method of preparing, drying and storing fish in a timely manner.” He added, however, that the fishmongers who prepare owal these days lack the right skills to properly make the snack.

“Everything has changed…earlier, we used to have skilled fishermen catching and producing dried fish, adhering to the highest standards,” he admitted.

“These days, however, we have inexperienced workers who choose to adulterate authentic Omani products, all in the name of profit. They salt and dry the fish at inappropriate times of the year, and in an unhygienic manner.

“They do not follow cleanliness procedures and are unconcerned about contamination,” he added, referring to pictures of fish that were unsafe to eat that were being shared on social media.