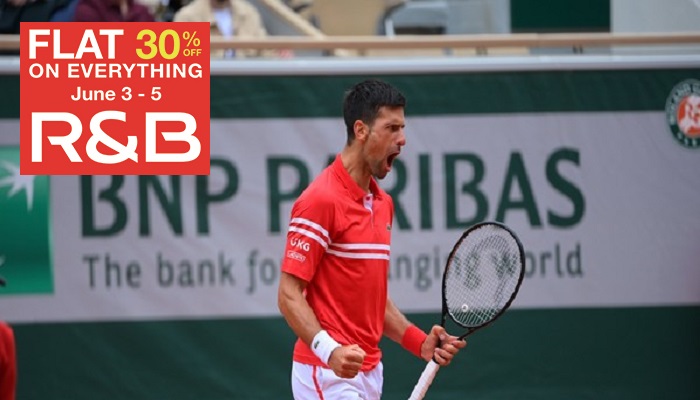 Paris: World number one Novak Djokovic was honoured and pleased by the comparisons between him and Mercedes Formula One championship driver Lewis Hamilton.

This comparison was made by ITV4 commentator Jim Courier as the Serbian ace demolished Ricardas Berankis 6-1, 6-4, 6-1 in straight sets at ongoing Roland Garros. With this win, Novak has reached French Open last 16 for a record 12th consecutive year. Djokovic's streak of appearances at this stage surpasses the 11-year stint managed by both Rafael Nadal and Roger Federer between 2005 and 2015.

"It's like the dominance of Lewis Hamilton and the Mercedes team. Berankis is a great driver and maximises everything under the hood. But Novak Djokovic is driving a completely different race car," suggested the American who himself is a 1991 and 1992 French Open champion.

"Berankis can't do the same things. On the same track, he can't race the same. Novak can drive how he wants."

Djokovic was very glad to hear this comparison but was 'embarrassed' to talk about his driving in front of 7 times F1 champion, Lewis Hamilton.

"Well, I'm honoured to be compared to Lewis. I respect Lewis and everything he does in his career, but also, off the court with his activism. Something that truly inspires me and a lot of athletes," said the 18-time winner.

"I don't want to talk about my driving next to Lewis' name. Honestly, it's embarrassing to speak about my driving, and in the same sentence with Hamilton. But I like to drive fast but I have to respect the rules, I guess," he joked. "I was never racing. But the analogy and the comparison of my game with an F1 car is definitely something that pleases me."

The 2016 champion is well aware of his next opponent in the round of 16.

"I think Lorenzo is very nice. First of all, very nice kid. Very nice guy. We did hit a lot in practice. We never faced each other, but we did practise actually this season on this surface in Monte-Carlo couple of times and other tournaments. I really like how he plays," revealed the top seed, who knows the youngster's repertoire well."

"I know very much that he is a big challenge to me. So there is no question I have to go out playing on a high level because he will not have much to lose. I'm sure he's gonna come out and really try to play tennis of his life playing on one of the two big courts."