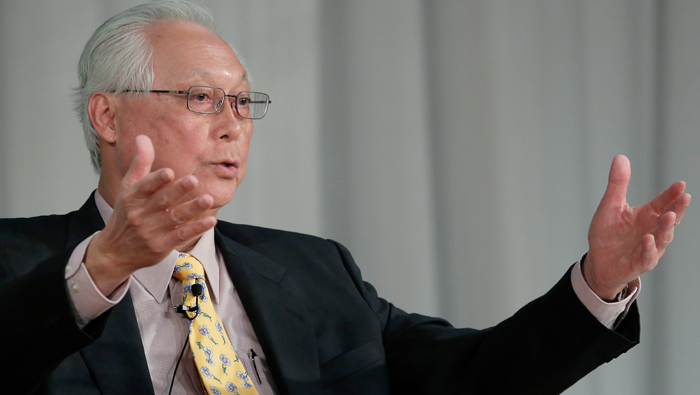 Tokyo: Amid concerns of a slowing global growth, India is a beacon of hope and has the potential to drive the world economy for the next 10 years, former Singapore prime minister Goh Chok Tong said on Monday.
“India is a hope for us. India is at a stage China was 10 years ago to amend slack in the economy," he said speaking at the Future of Asia Conference organised by Nikkei here.
Finance Minister Arun Jaitley, who arrived here on Sunday on a six-day tour to help mobilise investment, attended the conference, but did not make any statement. He is scheduled to speak at the conference on Tuesday.
The former Singapore prime minister felt that India should take advantage as China slows. "One should pass the message to Prime Minister Narendra Modi (that) India is growing... now and it is engine of the world for the next 10 years as China is slowing," he said.
He said the world economy can now depend on India for the growth push and it is not just China the world needs to depend on. "(The world) not just depends on China for pushing growth, India can be a very big partner."
The International Monetary Fund (IMF) last month cut its 2016 global growth forecast for the fourth time in the past year to 3.2 per cent, citing China slowdown, persistently low oil prices and chronic weakness in advanced economies.
This was down from 3.4 per cent projected in January. In contrast, for India, it retained its 7.5 per cent GDP expansion forecast for 2016 and 2017, up from 7.3 per cent in 2015. "With the revival of sentiment and pick-up in industrial activity, a recovery of private investment is expected to further strengthen growth," it had said.
"In India, growth is projected to notch up to 7.5 per cent in 2016-17, as forecast in October. Growth will continue to be driven by private consumption, which has benefited from lower energy prices and higher real incomes."
It, however, wanted the government to cut down subsidies, initiate labour reforms and dismantle infrastructure bottlenecks to sustain strong growth. The IMF had said a prolonged period of slow growth has left the global economy more exposed to negative shocks and raised the risk that the world will slide into stagnation.
It, however, upgraded its China growth forecast by 0.2 percentage point for this year and the next to 6.5 per cent and 6.2 per cent, respectively. China clocked 6.9 per cent growth in 2015 when India had recorded 7.3 per cent expansion.