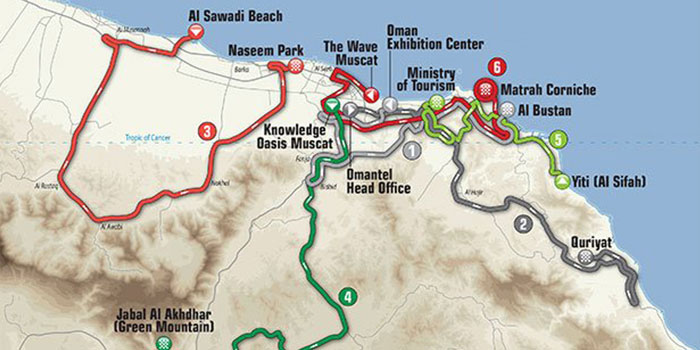 Muscat: A map of Tour of Oman routes has been announced by the organisers on their official twitter account.
The Tour of Oman will be held between February 14 and 19 in six stages, where cyclists from 18 teams will cover 885km.
The race provides an early opportunity to tackle some difficult climbs and test the riders' fitness. The race will also offer two sprinter-friendly stages, while puncheurs – riders who thrive on rolling terrain and short, steep climbs -- will have several chances to surprise the peloton.
In stage 1 on February 14, the cyclist will ride between Al Sawadi Beach and Naseem Park. On Feb 15, they will ride between Nakhal and Al Bustan, on Feb 16, they will ride between Sultan Qaboos University and Quriyat.