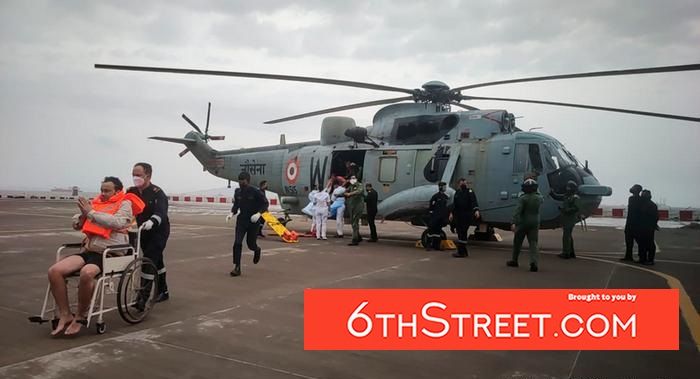 Fourteen people have been confirmed dead after a barge sank off Mumbai during a massive cyclone that battered the India's west coast.

The Indian navy has been hampered by rough seas and extreme weather conditions as rescuers search for scores of people still missing.

The navy said 184 people had been rescued within 24 hours from barge "P305," which was working for India's top exploration company, Oil and Natural Gas Corporation (ONGC).

Cyclone Tauktae, the most powerful storm the region has seen in over two decades, made landfall on India's western coast late Monday.

In a separate operation, a navy chopper rescued 35 people aboard another barge that was also engaged by ONGC and ran aground north of Mumbai.

The crude oil and natural gas company said that the two barges were carrying people employed for offshore drilling and slipped their moorings when the storm hit.

Tauktae caused huge ocean swells, flooding and strong winds, wreaking havoc in the states of Maharashtra and Gujarat over the last two days.

According to authorities, at least 29 more people have died in the two states.

More than 16,000 houses have been damaged and trees and power poles uprooted in Gujarat, where the cyclone came ashore packing sustained winds of up to 210 kilometers (130 miles) per hour.


Both Maharashtra and Gujarat are also among the Indian states hardest hit by a deadly second wave of the coronavirus.

The storm has put under further pressure authorities who are already battling a massive rise in COVID-19 cases and deaths amid a shortage of beds and medical oxygen in hospitals.

Prime Minister Narendra Modi was expected to conduct an aerial survey later Wednesday of the storm-hit areas of Gujarat — his home state.

Meanwhile, the cyclone has weakened into a depression over the south of Rajasthan and Gujarat, a statement by the Indian Meteorological Department said.