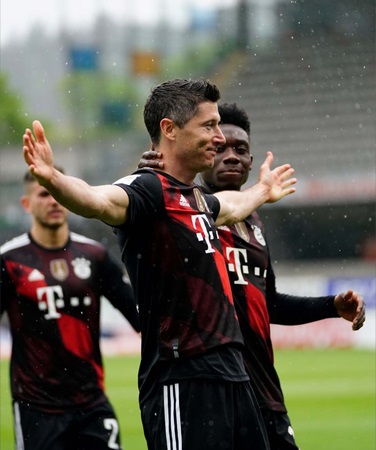 Munich: Bayern Munich striker Robert Lewandowski on Saturday matched the record of Gerd Muller by scoring his 40th Bundesliga goal of the season.

Lewandowski achieved the feat in the Bundesliga match against Freiburg. As a result of scoring in this match, he has just become the second footballer to score 40 goals in a single season of the competition. World Cup winner Muller had scored 40 goals for Bayern Munich in the Bundesliga way back in 1971-72. The former West Germany international still remains the club's all-time leading scorer, having registered 565 goals across 15 years, reported Goal.com.

In the last season, Lewandowski had scored 55 goals across all competitions and he is so far recorded 45 goals this season.

In the match against Freiburg, he scored in the 26th minute after successfully registering a goal from the penalty spot.

Lewandowski has been with Bayern Munich since 2014 and he is now approaching 300 goals for the club.

Last week, Bayern Munich had sealed the Bundesliga title and this is the ninth successive year that the side has managed to win the title.

The match between Bayern and Freiburg ended in a 2-2 draw on Saturday. The side will take on Augsburg in their final match of the Bundesliga season on Saturday, May 22.

Bayern currently has 75 points from 33 games and the side has lost just four games in the Bundesliga this season.