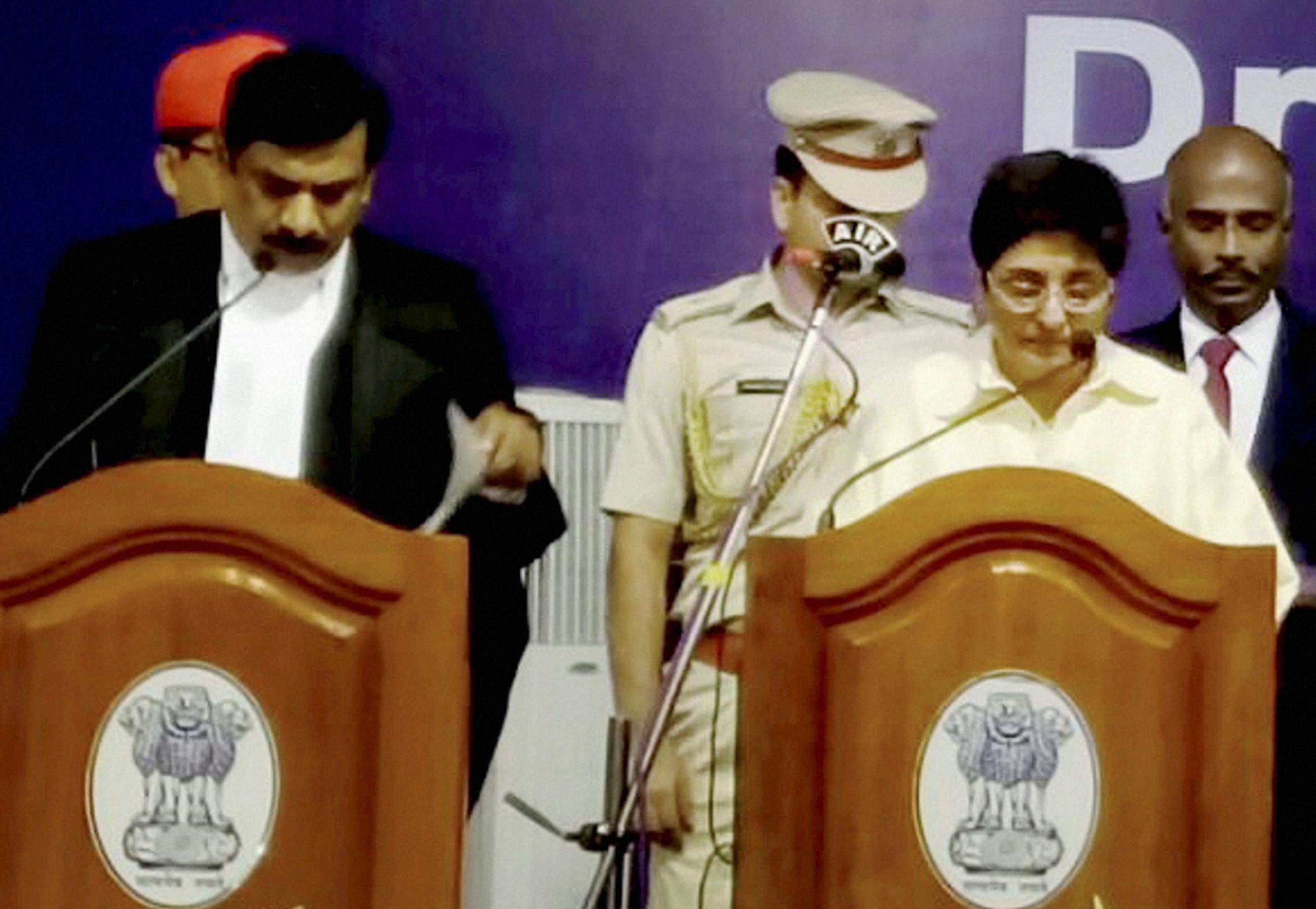 Puducherry: Former IPS officer Kiran Bedi on Sunday assumed charge as the 23rd Lieutenant Governor of Indian Union Territory, Puducherry. Senior judge of the Madras High Court Justice Huluvadi G. Ramesh administered the oath of office and secrecy to 66-year-old Bedi at Raj Nivas.
Bedi is the fourth woman Lt Governor of the Union Territory, a post which was under the additional charge of Lt Governor of Andaman and Nicobar Island for nearly two years. Chief Secretary to Puducherry government Manoj Parida earlier read out the her warrant of appointment issued by President Pranab Mukherjee.
Chief Minister designate V. Narayanasamy, former chief ministers N. Rangasamy, R. V. Janakiraman and M. D. R. Ramachandran, PCC president A. Namassivayam, elected legislators, Member of Lok Sabha Radhakrishnan, N. Gokulakrishnan (Rajya Sabha), French Consul General Philippe Janvier Kamiyama and former ministers were among those who witnessed the ceremony.
The LG's post in the Union territory had been lying vacant after the Narendra Modi Government removed UPA nominee Virendra Kataria on July 12 barely a year after he had been appointed.
Lt Governor of Andaman and Nicobar Island Lt Gen Ajay Singh had been given additional charge of Puducherry.
Born on June 9, 1949, Bedi, the country's first woman IPS officer, had led the BJP campaign in the 2015 Delhi Assembly elections but had to face the worst defeat in her maiden political innings with Arvind Kejriwal-led AAP winning 67 of the 70 seats.
An IPS officer of 1972 batch, Bedi had sought voluntary retirement from the service in 2007. She was then posted as Director General, Bureau of Police Research and Development. A sports lover and an author, Bedi is a recipient of Ramon Magsaysay Award as well as UN Medal for outstanding service. She was one of the pioneers of anti-corruption movement in 2011 along with Anna Hazare and Kejriwal.
Chandrawathi was the first woman Lt Governor and she held office for a short period from February to December 1990. The next woman LG was Rajendra Kumari Bajpai who held the office from 1995 to 1998 and she was followed by Rajani Rai from 1998 to 2002.