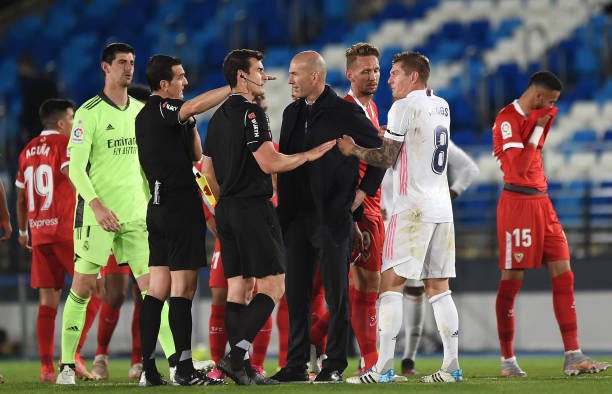 Madrid: Real Madrid coach Zinedine Zidane was a "bit angry" after a VAR decision went against the club in a 2-2 draw against Sevilla FC on Sunday.

The draw also denied Real Madrid the chance to take the top spot in LaLiga. Sevilla FC started strong against Zidane's men and took the lead with 21 minutes on the clock thanks to Fernando who netted the goal. Real Madrid tried hard but wasn't able to breach the defense as the scoreline read 0-1 at the end of the first half.

Marco Asensio netted the equaliser to bring the Whites level in the 67th minute. Moving ahead, Eder Militao was penalised (74th minute) after the corner kick struck his shoulder and then his hand. During a review of a 78th-minute penalty won by Karim Benzema, the officials found out the handball of Militao as a result Sevilla FC was awarded a spot-kick instead of Real Madrid.

"I don't understand anything. There was a handball by Militao, but also by Sevilla. I wasn't convinced by what the referee told me, but that's the way it is, he makes the calls," the Real Madrid website quoted Zidane as saying.

"I'm a bit angry today because I need the handball rule explained to me. But that's the way it is, we're not going to change anything," he added.

Ivan Rakitic didn't miss the chance as he netted the goal to put Sevilla on the course of a victory before Eden Hazard equalised in stoppage time.

"We're happy with our performance, the second half was spectacular. We got off to a slow start in the first 25 minutes, but the second half was really good. The league isn't in our hands now, but we'll fight right to the end, until the death," said Zidane.

Real Madrid is at the second spot with 75 points and will next lock horns with Granada on Friday.