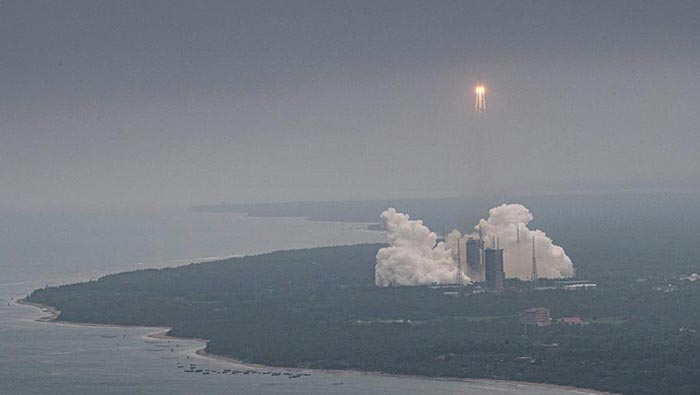 Beijing: Debris from a  Chinese rocket fell back to Earth on Sunday, disintegrating over the Indian Ocean, according to Chinese state media.

The reports cited the China Manned Space Engineering Office as saying that the point of impact was southwest of India and Sri Lanka.

The fragments are from the Long March-5b rocket that was used to launch the first module of China's new space station last month.

At 18 tonnes it is one of the largest items in decades to have undergone an uncontrolled reentry into the atmosphere.

There had been fervent speculation about where it would land, but given that Earth is nearly 70 per cent water the chances of it hitting an inhabited area were very small.

Last year, debris from a rocket fell on villages in Ivory Coast but there were no injuries or deaths.

Fragments from NASA's ill-fated Skylab plummeted back to earth in 1979 and landed in western Australia, but no one was harmed.

What has NASA said?
US space agency NASA has criticized China over a lack of transparency, accusing it of behaving irresponsibly as an uncontrolled re-entry of such a large object risked damage and casualties.

"It is clear that China is failing to meet responsible standards regarding their space debris," NASA Administrator Bill Nelson said in a statement.

"It is critical that China and all spacefaring nations and commercial entities act responsibly and transparently in space to ensure the safety, stability, security, and long-term sustainability of outer space activities," he said.

Jonathan McDowell, an astronomer at Harvard University's Center for Astrophysics, told the AFP news agency: "Having a ton of metal shards flying into the Earth at hundreds of kilometres per hour is not good practice, and China should redesign the Long-March 5B missions to avoid this."

Global Times, a pro-Beijing outlet, quoted a Chinese aerospace expert, Song Zhongping, as saying "it is an old trick used by hostile powers every time they see technological breakthroughs in China, as they are nervous."

The Long March 5B rocket lifted off from China’s Hainan island on 29 April.

It was carrying the Tianhe module, which contains what will become living quarters for three crew members on a permanent Chinese space station.
The Tianhe launch was the first of 11 such missions needed to complete the station.