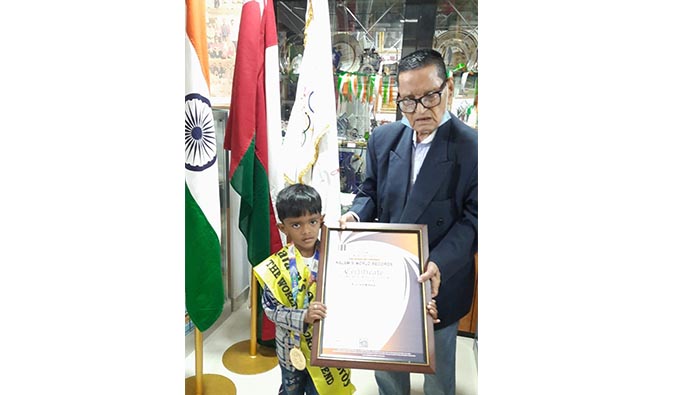 Nizwa: A four-year-old boy who covered a distance of more than a kilometre, while riding blindfolded on a bicycle in just 10 minutes has been honoured for his achievement by one of hockey’s most well-known personalities in Oman.

So unique was the feat accomplished by K Vishawasai, who was born in the town of Thirunelveli in the south Indian state of Tamil Nadu, that his efforts have been recorded in Kalam’s World Records, which spreads awareness of uniquely talented individuals from around the world.

For his inclusion, Vishawasai was honoured by SAS Naqvi, a former national team hockey player for India, who later went on to become the technical advisor of Oman’s Olympic Committee.

Despite his tender age, Vishawasai, who also has a little sister, is a boy of many talents: he often displays a number of jaw-dropping skills with the bicycle, and has a tremendous memory, capable of recalling the names and brands of vehicles, just by looking at their logos.

His repository of knowledge also includes the names of fruits and vegetables not commonly known to many, as well as an impressive glossary of animals and birds, many of which are rather rare.