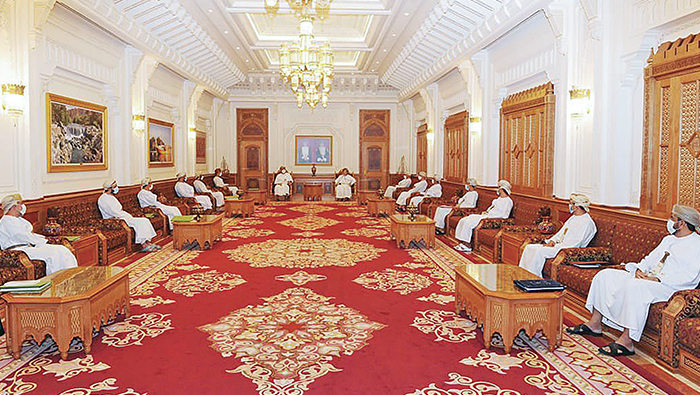 The meeting came within the framework of cooperation of institutions in implementation of the Basic Law of the State’s provision requiring the State’s institutions to continuously coordinate with each other, engage in fruitful dialogue and forge visions targeting the implementation of economic and social plans and programmes in tune with the best standards of performance.

At the outset of the meeting, HH Sayyid Fahd commended the significant role of Majlis Al Shura Office when coordinating with the government for the realisation of citizens’ aspirations.

During the meeting, emphasis was laid on the significance of the current period which requires rallying efforts to safeguard the gains of the comprehensive development march that covers all parts of the Sultanate, as well as ways to address the challenges posed by coronavirus.

The meeting reviewed the challenges posed by coronavirus (COVID-19) pandemic to all world economies.

The government places the Majlis Al Shura on top of its priorities as a basic partner in the nation building process aimed to implement domestic development plans.

This is realised through ministers’ attending sessions of the Majlis and discussing their draft plans and their ministerial statements, as well as means of upgrading services rendered to citizens.

The procedures include ministers’ responding to Majlis Al Shura’s requests to host government officials to discuss with them the topics studied by the Majlis’s committees.

The two sides discussed the Council of Ministers’ approach to meetings in which governors’ host members of Majlis Al Shura, in turns, to update them about services and municipal affairs in their respective governorates.

The first topic was related to cooperation and partnership between the two councils, the Shura Council and the Council of Ministers, in accordance with the Basic Law of the State and the Law of the Oman Council, and the second item dealt with the efforts made by the government in employing the national workforce, where it arrived, its results, and its upcoming plans. While the third item was related to the government’s plan for corporate governance.

He added: “The meeting resulted in several results, including the mandate of His Highness the ministers to attend the Shura Council for the purposes of presenting proposals and discussion, as well as activating the Law of the Council of Oman with regard to the view of the Shura Council, in the presence of their excellencies ministers for requests for discussion.”

The joint meeting reviewed the agenda and topics, including measures to foster government-Majlis partnership, efforts exerted by the government for the employment of Omani job seekers and governance of government firms.

It was agreed during the meeting to step up social awareness about all that serves the citizens of the Sultanate under the wise leadership of His Majesty Sultan Haitham Bin Tarik.