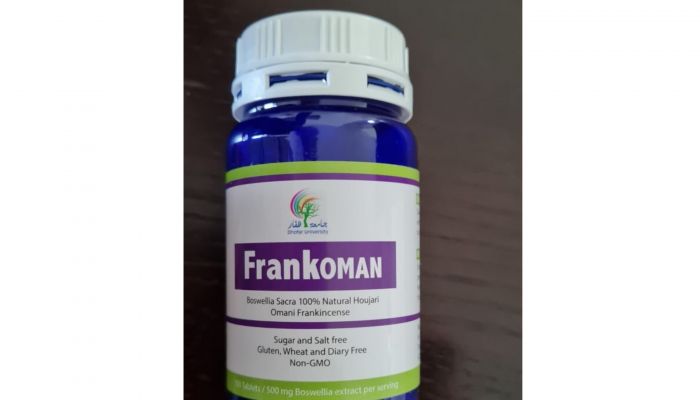 According to the Al Shabiba report, Frank Oman is the first Omani food supplement developed by the Dhofar University Research Center. It's produced using Omani frankincense gum and manufactured by the Swiss company Alpinamed AG in the form of tablets to be taken via the mouth. The product is certified by the Swiss Medicines Authority and manufactured according to its requirements and Good Manufacturing Practice GMP standards.

This achievement, which was reached after more than a year of cooperation between Dhofar University and the AlpinaMed AG-Switzerland, which included conducting joint studies that included chemical analyzes of the active substances in Omani frankincense gum with advanced and sophisticated equipment in each of the company’s laboratories and Dhofar University independently. Comparisons were made between Indian frankincense and Omani frankincense in regards to the active substances responsible for the anti-inflammatory activity, especially in infections related to the immune system, which are Boswellic and Lipoic acids. In addition to many other studies conducted by Dhofar University that included determining the effectiveness of the product in terms of biological and pharmacological aspects and integrated toxicological studies, including long-term. As well as its effects on genes, according to international protocols and other studies.

Professor Luay Rashan the Head Researcher at Dhofar University Research Center confirmed “Frank Oman can be used for some arthritis, colon and lung infections, and the container has 100 tablets to be taken by mouth according to the instructions mentioned on the container. The first phase of product Marketing has already started within German-speaking countries (Switzerland, Austria, and Germany) to later be followed by other countries. We hope that the nutritional supplement will be registered by Oman’s Ministry of Health and according to the requirements of Dietary Supplements Registration Committee.”

This great achievement by Dhofar University will open the door to the global adoption of Omani frankincense, as is the case in Indian frankincense, and to be used in the pharmaceutical industries, nutritional supplements, and cosmetic preparations by international companies.

On the other hand, it is hoped that seven products of Omani frankincense developed by Dhofar University will be produced during the year 2021 and will be manufactured and marketed in the US market as a first step by the US company Pars Bioscience, LLC. Four of those products will be in capsule form for treatment of infections in airways and joints, irritable bowel syndrome (IBS), and benign prostatic hyperplasia (BPH). The other products will be in the form of ointments for external use to treat arthritis, muscle spasms, wounds, burns, and hemorrhoids.

Professor Luay indicated that this product and will be talked about in detail after its manufacturing is completed in the upcoming weeks.

This is an addition to the great achievements made by Dhofar University in the field of frankincense and medicinal plant research.