Rebels claim to have shot down military helicopter in Myanmar 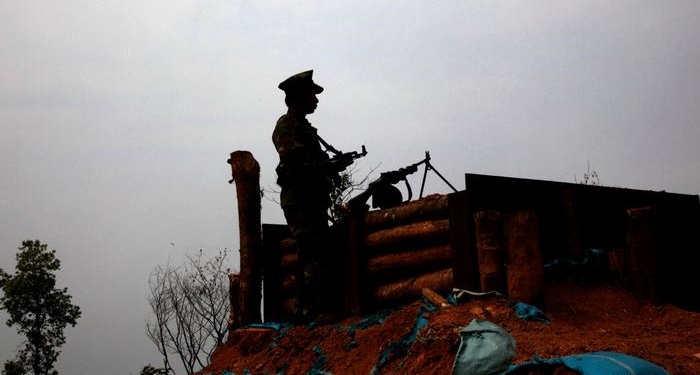 A leading Myanmar rebel group said it shot down a military helicopter after returning fire on Monday.

An official from the Kachin Independence Army (KIA) — one of the country's most powerful ethnic factions — said it struck back after air strikes by the military near the northern town of Momauk.

"The military council launched air strikes in that area since around 8 or 9 this morning... using jet fighters and also fired shots using a helicopter — so we shot back at them," the KIA's information department head, Colonel Naw Bu, said. He would not comment on what weaponry was used to bring the chopper down.

The KIA in Kachin state near the border to China has been in conflict with Myanmar's military rulers for decades, seeking an independent state, with the conflict largely unconnected to February's coup.

US and German embassies decry treatment of journalists


Meanwhile, a group of foreign embassies in Myanmar condemned the military's crackdown on journalists, saying they had become a "target of repression."

Independent media outlets have been shut down or had their licences revoked over the last three months, and Myanmar authorities have blocked internet access in an effort to stem the flow of information about the protests, as well as the junta's response.

"We call for the immediate release of all media workers, the establishment of the freedom of information and communication and for the end of all internet restrictions in Myanmar," the statement said, noting that of the 80 journalists arrested, more than half were still detained.

The signatories included the embassies of the United States, the European Union, Australia, Britain, France and Germany.

More than 750 civilians killed in protests


The military ousted the civilian leader Aung San Suu Kyi on February 1 and over 750 people have been killed in the ensuing protests against the coup.

The junta acted upon grievances it held over November's election, which resulted in a victory for Suu Kyi's National League for Democracy. The military cried foul and felt their fraudulent claims were not addressed by a commission that deemed the vote fair.

Suu Kyi, 75, was detained in the wake of the coup along with several members of her party.

Security forces have sought to quell near-daily pro-democracy protests with deadly force, while long-simmering conflicts with ethnic rebels have erupted.

The KIA, which has waged a decades-long insurgency against the military in northern Kachin state, has been a regular target of air strikes in recent weeks.