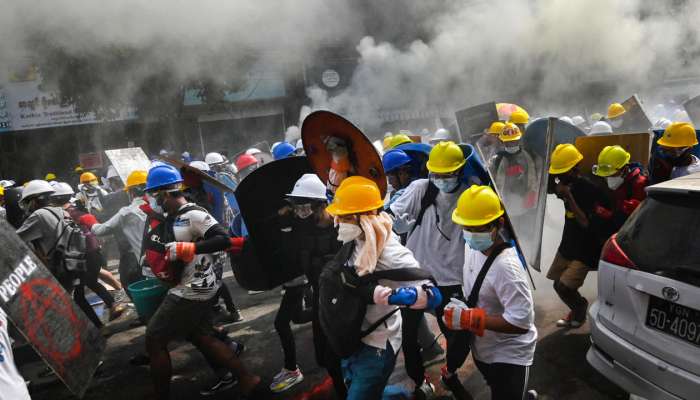 Myanmar: Three months after a coup plunged Myanmar into crisis on February 1, as many as eight people were killed as security forces opened fire on some of the biggest protests against the military rule in the country.

The protests were coordinated with demonstrations in Myanmar communities around the world to mark 'the global Myanmar spring revolution', after a spell of dwindling crowds, reported CNN. "Shake the world with the voice of Myanmar people's unity," the organisers said in a statement.

Streams of demonstrators, some led by Buddhist monks, made their way through cities and towns across the country, including the commercial hub of Yangon and the second city of Mandalay, where two people were shot and killed, the Mizzima news agency reported.

Citing local media, CNN reported that a blast outside a police barracks in Yangon early on Sunday. No casualties have been confirmed.

A couple of more blasts later went off in the city, with one occurring outside an administration official's home, injuring one person.

The Assistance Association for Political Prisoners (AAPP) advocacy group says security forces have killed at least 759 protesters since the coup.

Protesters in Tokyo demanded that the Japanese government recognise the National Unity Government, a parallel entity to the junta, as a legitimate government of Myanmar, while those in Taipei showed their disdain for the military regime.

On February 1, the Myanmar military overthrew the civilian government and declared a year-long state of emergency.

The coup triggered mass protests and was met by deadly violence.

The military takeover triggered mass protests which led to violent clashes and brutal suppression of peaceful demonstrators. More than 750 people have been killed over 2.5 months of protests while thousands of others have been detained.

On April 24, Junta leader Min Aung Hlaing met leaders of the ASEAN in Jakarta where he was urged to immediately halt the "military violence" against protesters and to release detained civilian leaders.