UN warns Myanmar on the brink of economic disaster due to coup, COVID-19 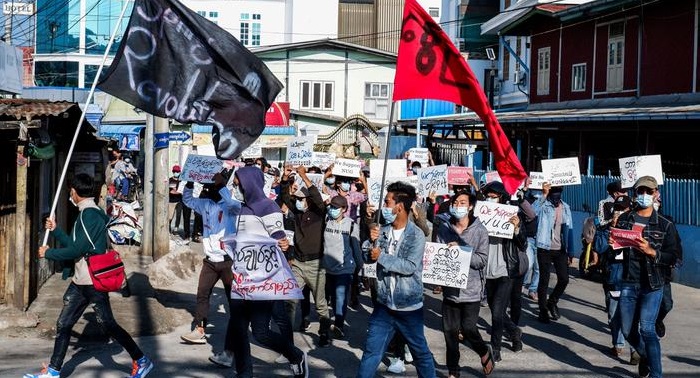 New York: The United Nations warned Myanmar that it is on the brink of economic disaster due to the double shock of the military coup and COVID-19 pandemic.

Rising food costs, significant losses of income and wages, the crumbling of basic services such as banking and health care, and an inadequate social safety net is likely to push millions of already vulnerable people below the poverty line of USD 1.10 a day -- with women and children among the hardest hit.

That level of impoverishment has not been seen in Myanmar since 2005, when the country was an isolated, pariah nation ruled by a previous military regime, it said, reported CNN.

UNDP Administrator Achim Steiner said it is clear "we are contending with a tragedy unfolding."

"We have fractured supply chains, (disrupted) movement of people and movement of goods and services, the banking system essentially suspended, remittances not being able to reach people, social safety payments that would have been available to poorer households not being paid out. These are just some of the immediate impacts," Steiner said. "The protracted political crisis will obviously worsen this."

Myanmar had made solid progress in reducing poverty, particularly since the start of a democratic transition from military rule in 2011 that prompted economic and political reforms.

It was still considered one of the poorest countries in Asia, however, with an estimated third of the population subsisting on such a low or precarious income it was one economic shock away from being thrown back into poverty, reported CNN.

But it was hit with the double shock of the coronavirus pandemic and Myanmar's military coup.

While, the second shock of February 1 was led by armed forces commander in chief Gen Min Aung Hlaing, who seized power, overthrowing the democratically elected government of Aung San Suu Kyi and her National League for Democracy party and installing a military junta.

The anti-coup protestors ongoing protests across Myanmar and the rise of a Civil Disobedience Movement in which thousands of blue and white-collar workers including doctors, teachers, civil servants and factory workers have gone on strike with the aim of disrupting the economy and unseating the general has completely wiped out the progress made by Myanmar in reducing poverty, the report said.

The impact of the pandemic alone would have raised Myanmar's poverty level from 24.8 per cent to 36.1 per cent, the UNDP estimated. If the massive economic and social disruption of the coup continues, that increases further to 48.2 per cent.

"By then, the shock from the crisis will have resulted in significant losses of wages and income, particularly from small businesses, and a drop in access to food, basic services and social protection," the report said.

Urban poverty is expected to triple as the towns and cities have been hardest hit by COVID-19 and remain the focus of the most severe military crackdowns, reported CNN.

According to the study, women and children will bear the heaviest brunt. Myanmar already has high child poverty rates and the combined crises are "putting an entire generation in peril", the UN Children's Fund (UNICEF) said.

Meanwhile, some shipping firms have temporarily stopped services to the country, the report said. About 80 per cent of Myanmar's trade is seaborne, and the UNDP estimated trade in ports dropped by up to 64 per cent in the two months after the coup.

Similar disruptions to transport and the movement of labour and goods, as well as pressure on the country's currency, the kyat, has also hit Myanmar's agriculture industry, which 70 per cent of the population depend on for their livelihoods.

Moreover, a humanitarian crisis is unfolding as a result. The UN World Food Program last week warned "hunger and desperation" are rising in Myanmar and predicted that up to 3.4 million people will be suffering across the country in the next six months.

"Overall, Myanmar is on the brink of economic collapse and risks becoming Asia's next failed state," the UNDP report said.