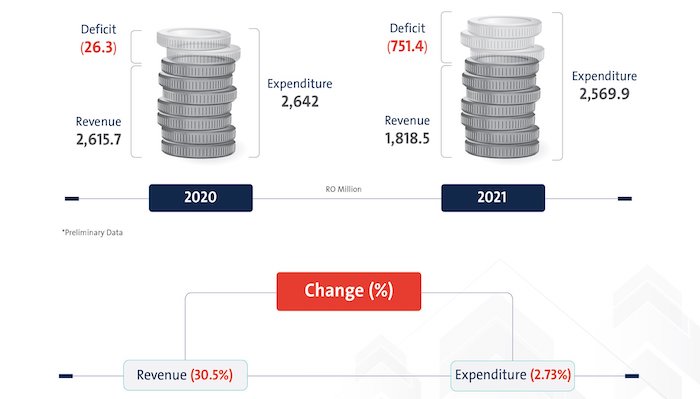 Muscat: In the first quarter of 2021, the Sultanate’s budget deficit grew to OMR 751.4 million, compared to OMR 26.3 million for the same period last year.

According to the Ministry of Finance (MoF), the state budget also witnessed a 2.73 per cent reduction in public spending and a 30.5 per cent reduction in revenue for the same period year-on-year. A statement by the Ministry said, “By the end of the first quarter of 2021, public revenue totalled OMR 1,818.5 million, down by 30.5 per cent as compared with the same period of 2020. Net oil revenue declined by 34.2 per cent. This is attributable to low oil price and economic implications triggered by COVID-19 pandemic.”

On the other hand, current revenue increased by 6 per cent. The MoF explained: "It is worth noting that the decline in capital revenue and repayments during the first quarter of 2021, as compared to the same period of 2020, is due to the privatisation of Oman Electricity Transmission Company that generated a yield of OMR 365.4 million, recorded in March 2020."