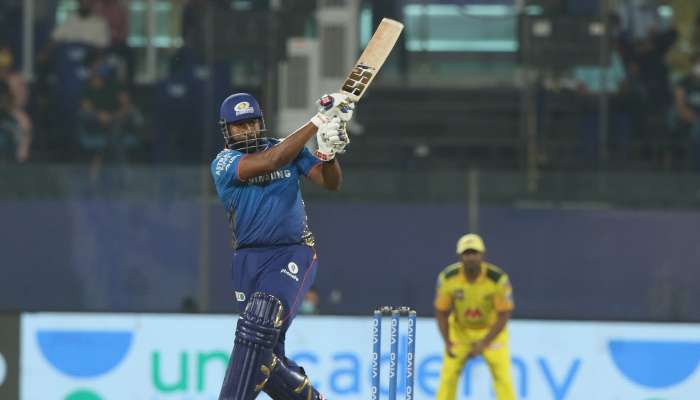 New Delhi: Kieron Pollard played one of the most memorable innings in the history of the Indian Premier League (IPL) as Mumbai Indians (MI) defeated Chennai Super Kings (CSK) by four wickets  at the Arun Jaitley Stadium on Saturday.

Pollard remained unbeaten on 87 off just 34 balls as Mumbai gained a four-wicket victory. With this win, MI remain at the fourth spot with 8 points. On the other hand, CSK also remain static at the first spot with 10 points. Chasing 219, MI got off to a steady start as openers Rohit Sharma and Quinton de Kock put on 58 runs inside the first six overs. The 71-run opening stand finally came to an end in the 8th over as Shardul Thakur dismissed Rohit (35). In the very next over, Ravindra Jadeja removed Suryakumar Yadav (3), reducing Mumbai Indians to 77/2.

Mumbai fell further into a slump in the 10th over as Moeen Ali sent de Kock (38) back to the pavilion and as a result, CSK marched ahead in the match. Krunal Pandya and Kieron Pollard next joined forces in the middle and the duo kept Mumbai in the match with their partnership. Pollard took the role of being the aggressor and he dispatched sixes with ease.

Pollard continued on with his carnage and he brought up his fifty off just 17 balls. With 49 needed more for the win, Mumbai ended up losing the wicket of Krunal (32) and this put an end to the 89-run stand for the fourth wicket. With 31 runs needed off the final two overs, Pollard (87*) and Hardik Pandya (16) did not mess around and they guided Mumbai to a memorable victory.

Earlier, Moeen Ali and Faf du Plessis played quickfire knocks of 58 and 50 as CSK posted a score of 218/4 in the allotted twenty overs. Along with Faf and Moeen, Ambati Rayudu provided the much-needed boost to the CSK lineup as he played a quickfire knock of 72 runs off just 27 balls. Ravindra Jadeja also chipped in with an innings of 22 runs. For Mumbai, Kieron Pollard returned with two wickets.

Asked to bat first, CSK got off to the worst start possible as the side lost its in-form opener Ruturaj Gaikwad (4) in the very first over as he was sent back to the pavilion by Trent Boult. Moeen then joined du Plessis in the middle and the duo took CSK's score to 49/1 at the end of the sixth over. Moeen and Faf put together 108 runs for the second wicket and this stand saw CSK scoring runs at a brisk pace. The left-handed Moeen (58) was finally sent back to the pavilion by Jasprit Bumrah in the 11th over. In the very next over bowled by Pollard, CSK lost the wickets of du Plessis (50) and Suresh Raina (2), and the side was reduced to 116/4.

Rayudu and Jadeja joined forces in the middle and the duo did not let the momentum drop for CSK. The right-handed Rayudu took on the mantle of being aggressive and he kept dispatching Mumbai bowlers for constant boundaries and sixes. Both batsmen formed an unbeaten stand of 102 runs for the fifth wicket, and this also saw Bumrah conceding the most runs in his four-over spell in the IPL. Bumrah went for 56 runs in his four overs. In the end, CSK posted a score of more than the 210-run mark. Rayudu's innings was studded with 4 fours and seven 6s.