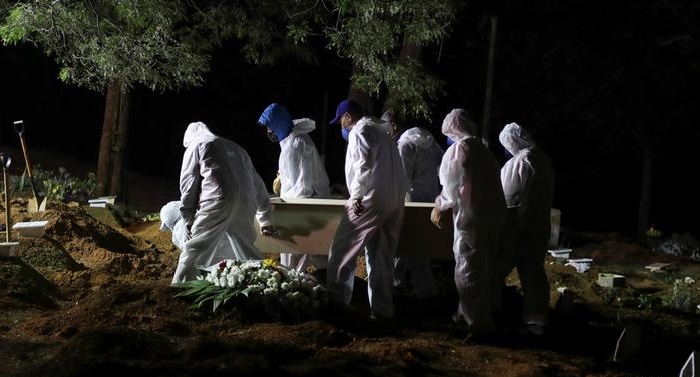 This week, Brazil topped 400,000 COVID-19 deaths. That is roughly a quarter of the pandemic's toll so far and about 100 more deaths than had been recorded by the end of March.

This death toll is nine times higher than the number of homicides the country saw last year — and Brazil has one of the highest homicide rates in the world.

Although daily new infections are slowing down slightly, the vaccine rollout is lagging after Jair Bolsonaro's government failed to secure enough doses. Brazil’s Senate has launched an inquiry to investigate the government's handling of the coronavirus pandemic.

The authoritarian Bolsonaro is being accused of not living up to his responsibility as president after repeatedly downplaying the severity of the pandemic and sabotaging state governors' shutdown measures. His government also invested in ineffective COVID-19 treatments instead of vaccines.

Recent numbers have indicated that new infections may be stabilizing, though the number remains high. That has led many politicians and people to grow complacent. Some states have even loosened their social distancing measures already.

But intensive care units around the country are hitting their limits. In 17 of the 27 state capitals, including Brasilia, COVID-19 patients are using more than 90% of public ICU beds, according to the Folha de S. Paulo newspaper. And only 7% of the population has been fully vaccinated.

Many experts fear that loosening restrictions could reverse the slight downward trend on daily deaths, and push numbers back to 4,000-plus — as was the case just a few weeks ago.

After infection numbers peaked in March and early April, the curve of new infections and death curve somewhat flattened. In the past week, about 2,400 people died per day and there were about 57,000 daily coronavirus cases.

It was the fact that mayors and governors tightened restrictions on social life in March that made this possible, according to experts. Another factor was that parts of the population reduced their contacts regardless of state guidelines because they were shocked by the surge in cases.

Sao Paulo state, for example, went into a state of emergency in mid-March. Authorities imposed a curfew, clamped down on religious services and required employees to work from home if possible. The city of Rio de Janeiro followed suit on March 26, closing down nonessential businesses.

"Of course this had an effect," said Roberto Kraenkel of the Observatorio COVID-19 BR, an independent initiative that shares scientific information about the coronavirus pandemic in Brazil. "There were fewer people circulating, and they had fewer contacts, which slowed down infection and death rates."

As a result of these fragile improvements, Sao Paulo lifted the state of emergency on Saturday, opening bars, restaurants, gyms and cinemas. In Rio, bars and restaurants are also allowed to operate.

Loosening these restrictions is dangerous, especially as Brazilians grow increasingly tired of isolating, said Marcelo Bragatte, a coordinator at Rede Analise COVID-19, an interdisciplinary group of researchers at the Federal University of Rio Grande.

"It's not normal to plateau around 3,000 or 2,500 deaths per day," Bragatte said. "To open up schools and some stores because our infection rate is slowing down is crazy. It's as if you were drowning in a 10-meter-deep pool and the water level went down to 5 meters. That wouldn't save you either.”

Countries around the world are betting on mass vaccination campaigns to get the pandemic under control. But Brazil was slow to sign contracts with producers, and its rollout has been plagued by shortages, delays and interruptions. This is one of the aspects the Senate inquiry is investigating.

"We have few vaccines, and it will be a long time before a great part of the population will be immunized to stop the pandemic," Kraenkel said. "Until this happens, there is always the possibility of new outbreaks and case surges."

Kraenkel emphasized the importance of mass testing and contact tracing: "something that was never on the government agenda."

Bragatte said Brazil's "fatal" numbers led back to the Bolsonaro government's disregard for scientific warnings from the very beginning. Instead, the government based its decisions on a false choice between protecting public health or the economy, he said.

"They are symbiotic," Bragatte added. "The economy depends on people — not on numbers."

Bragatte said Bolsonaro's stance had played a significant role in worsening the pandemic.

"Leaders have a profound effect," he said. "Even when all the scientists in the country work to disseminate information, they don't have the same reach as a president leading by bad example."