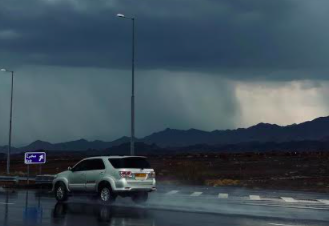 Muscat: The Oman Meteorology has issued a warning of strong winds accompanied by rain and low horizontal visibility.

The General Directorate of Meteorology said, "Please pay attention to active descending winds associated with thunderstorms, with the possibility of a decrease in horizontal visibility."

"The aerial image shows the density of clouds currently in the airspace of the Sultanate, interspersed with the activity of rainy thunder clouds in several areas of the Hajar Mountains and the deserts of Al Dhahirah, and cumulonimbus rain clouds on the Dhofar Mountains and the surrounding areas," the Oman metrology added.

In general, cloudy weather over most of the governorates of the Sultanate, with continued chances of cumulus clouds and scattered thunderstorms, sometimes accompanied by active downwind, over the governorates of Dhofar and Al Wusta. And on the Hajar Mountains and the surrounding areas and extends to the coasts of the Sea of Oman.