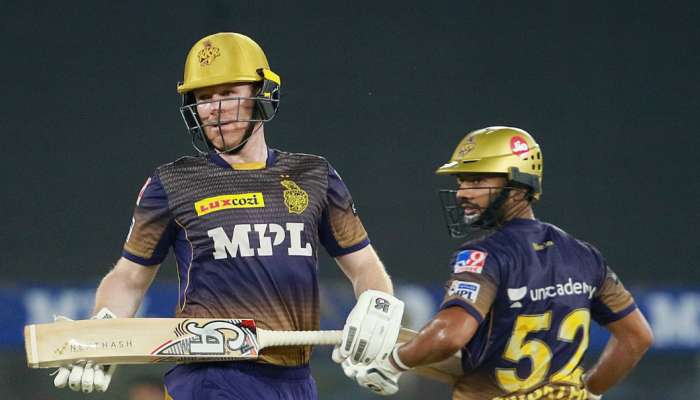 With the second COVID-19 wave rampant across the country, Morgan said the side is constantly talking about it within the KKR camp and admitted that the players are lucky enough to not get "affected by it very much" as they are in a bio-secure bubble. "Yes, we're constantly talking about this situation that's unfolding outside of our bubble. It's not nice watching from afar, considering how lucky we are to be in a bubble and not be affected by it very much," said Morgan while replying to a query from ANI in a virtual press conference following their win over Punjab Kings.

"We obviously lend our support and heartfelt gratitude to everybody who is ill or going through tough times.

"Certainly, in the UK last year, we went through severe lockdown for prolonged periods of time and it looked for a long time that cricket wasn't going to be played for our summer. But coming together and working together, certainly, with the guidance of the government, the England cricket board and everybody at home helped change that," he added.

The England limited-overs captain cited the examples of Premier League and Bundesliga, the tournaments which were played despite the countries being in lockdown due to the COVID-19 pandemic. Morgan feels the ongoing IPL should continue as long as "it doesn't disturb what's happening in the public eye".

"Yeah, I think certainly when we came out of our first initial lockdown period, I remember the first sport being on TV was probably in New Zealand and Australia. It was a rugby union and rugby league. Then slowly, the Bundesliga started, then the Premier League started," said Morgan.

"And that almost displayed that you can play sport while the country is almost in full lockdown. If there's a template to make that happen, it has happened, but also as long as it doesn't disturb what's happening in the public eye," he added.

KKR pacer Pat Cummins has donated $50,000 to the PM-Cares Fund and also urged fellow players who are participating in the ongoing IPL 2021, to come forward and donate as India fight the coronavirus pandemic.

KKR are at the fifth spot in the points table and will next lock horns with Delhi Capitals on Thursday.