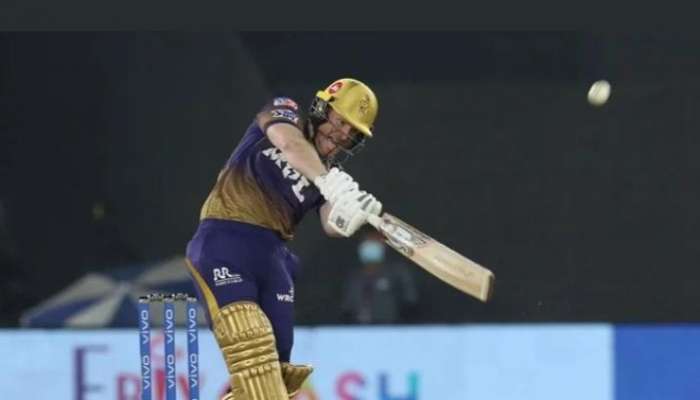 With this win, KKR finally registered a second win of the season after four successive defeats. A spirited bowling performance from KKR restricted Punjab Kings to 123/9 in their allotted 20 overs. In reply, skipper Eoin Morgan and Rahul Tripathi led the run-chase and scored unbeaten 47 and 41 runs respectively to put the side over the line with 20 balls to spare.


Chasing 124, KKR had a wobbly start as they three wickets inside the first three overs. Nitish Rana (0), Shubman Gill (9) and Sunil Narine (0) departed cheaply as Punjab bowlers gave their all to defend the low score.


But the 66-run stand between Morgan and Tripathi for the fourth wicket depleted any chances of a turn-around in the encounter. The duo added runs quickly and took charge on Punjab bowlers. Deepak Hooda bagged Tripathi in the 11th over after he had scored 41 runs studded with seven fours.


Andre Russell joined Morgan in the middle after Tripathi's dismissal. Russell's nine-run stint ended in the 15th over as a sharp throw from Arshdeep Singh hit the base of the stumps and found him short of the crease.


Dinesh Karthik came in to bat at number seven. Karthik and Morgan then stitched an unbeaten 28-run match-winning stand. Karthik remained unbeaten on 12 runs while Morgan scored not out 47 off 40 including two sixes and four 4s.


For KKR, Mohammed Shami, Moises Henriques, Arshdeep and Hooda picked one wicket each.


Earlier, KKR bowlers backed their skipper Eoin Morgan's decision of bowling after winning the toss as they bowled on tight lengths and did not give any loose balls to Punjab batters to score freely.


Apart from openers KL Rahul and Mayank Agarwal, no other batsman was able to stitch a decent partnership. Rahul and Mayank gave a slow start to the side and added 36-run for the opening wicket. Pat Cummins bagged the first wicket for his side as he dismissed Rahul (19) in the sixth over.


Chris Gayle could not live up to the expectation as he was sent back to the pavilion on a golden duck by Shivam Mavi.


Things did not turn good for Punjab as Deepak Hooda (1) too departed cheaply in the eighth over. Nicholas Pooran and Mayank build an 18-run brief stand for the fourth wicket but Narine broke the partnership. Mayank departed after scoring 31 runs studded with two sixes.


In the death overs, Chris Jordan's 30-run knock off 18 balls guided the side to a respectable total in the end.


For KKR, Krishna returned with the figures of 3-30 in his four overs while Cummins and Narine scalped two wickets each.