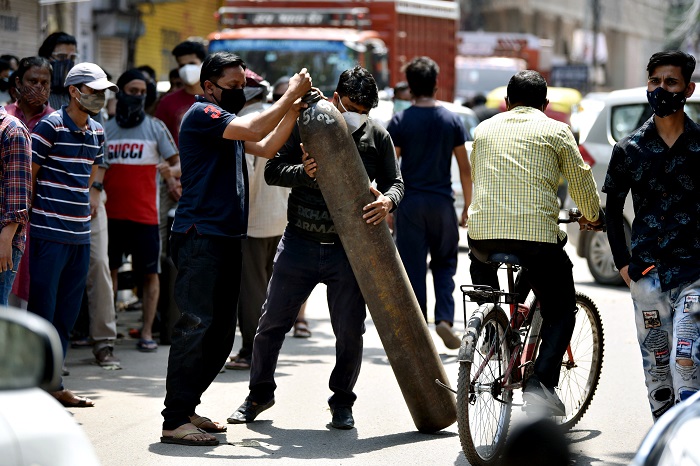 German Chancellor Angela Merkel said Sunday that her government was preparing emergency aid for India as the country grapples with a devastating surge in coronavirus infections.

On Sunday, India recorded a new daily high of 349,691 coronavirus cases and 2,767 deaths — the worst toll since the start of the pandemic.

"To the people of India I want to express my sympathy on the terrible suffering that COVID-19 has again brought over your communities," Merkel said in a message shared on Twitter by her spokesman Steffen Seibert.

"The fight against the pandemic is our common fight. Germany stands in solidarity with India and is urgently preparing a mission of support."

The German Defense Ministry said it's assessing the possibility of providing a mobile oxygen generator and other medical equipment.


European Commission chief Ursula von der Leyen said she was alarmed by the situation in India.

"The EU is pooling resources to respond rapidly to India's request for assistance," von der Leyen said on Twitter. "We stand in full solidarity with the Indian people!"

The US will "immediately" send supplies of the raw materials needed to make vaccines, as well as therapeutics, tests, ventilators and protective equipment to India, the White House said in a statement on Sunday.

"The United States has identified sources of specific raw material urgently required for Indian manufacture of the Covishield vaccine that will immediately be made available for India," it said.

US President Joe Biden said on Twitter that "just as India sent assistance to the United States as our hospitals were strained early in the pandemic, we are determined to help India in its time of need."

India has been calling for a temporary waiver on vaccine patents to allow more countries to manufacture jabs and accelerate their rollout.

"As a gesture of solidarity with the people of India in the wake of the current wave of COVID-19, Pakistan has offered to provide relief support to India including ventilators," the Foreign Ministry said in a statement late on Saturday.

The UK, meanwhile, has said it was sending more than 600 pieces of medical equipment to India, including ventilators and oxygen concentrators.

France said it plans to support India with oxygen capacity in the next few days, while Russia has also pledged to assist India by sending medical equipment.


DW's New Delhi bureau chief Amrita Cheema described the situation in the Indian capital as "very critical" and said, "time is of the essence."

According to Cheema, the local Delhi government believes the only way to curb infections is to "impose strict measures to prevent people-to-people contact," which it considers "the only weapon to stem the flow."

The Delhi government is urgently in need of 700 tons of liquid oxygen, Cheema told DW, adding that it has appealed to the national government as well as other state governments to send oxygen supplies.

"There is an oxygen emergency here," she said.

The Indian government has deployed military planes and trains to deliver oxygen to New Delhi, and waived customs on the import of oxygen and medical supplies. It has also mobilized its armed forces to send in more oxygen.

Prime Minister Narendra Modi said on Sunday the government was fighting with all its might.

"Our spirits were high after successfully dealing with the first wave," Modi said in a radio address. "But this storm has shaken the nation."

Modi had declared victory over coronavirus in January.

Critics have slammed his government for allowing for big religious and political gatherings to go ahead, and for failing to plan for the devastating wave the country is now facing.

What is the situation right now?

The country has more than 16.9 million infections in total, behind only the United States.

As well as the country's health care system reaching breaking point, crematoriums and burial grounds have been overwhelmed with dead bodies.

Delhi, the country's hardest-hit city, on Sunday extended its weeklong lockdown as hospitals struggled with a shortage of beds and oxygen supplies.

"We have decided to extend the lockdown by one week ... The havoc of corona[virus] continues and there is no respite. Everyone is in favor of extending the lockdown," Delhi Chief Minister Arvind Kejriwal said in a video statement.

Some 192,311 people have died of the coronavirus in India so far, although experts say the toll is likely a huge undercount.

Suspected cases are typically not included and many deaths have been attributed to underlying conditions.