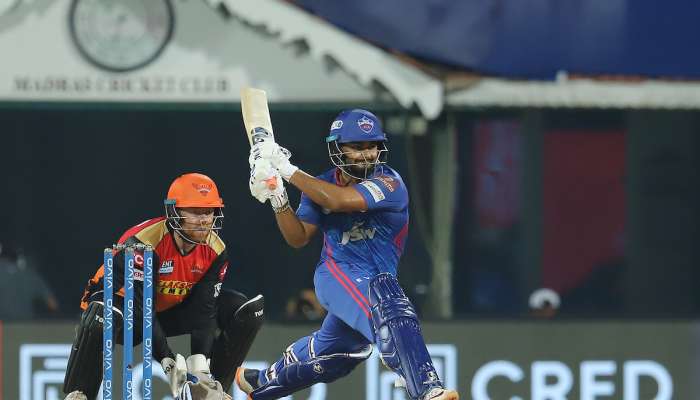 Chennai: Delhi Capitals registered a thrilling win in the Super Over against SunRisers Hyderabad in the Indian Premier League match at the MA Chidambaram Stadium on Sunday evening.

Both the teams scored 159 runs in the allotted 20 overs as a result the match went into the Super Over. Axar Patel restricted Kane Williamson and David Warner to just seven runs. In reply, Rishabh Pant and Shikhar Dhawan chased the target on the last ball. Earlier, a half-century from Prithvi Shaw and skipper Rishabh Pant's 37-run knock guided Delhi Capitals to 159/4 in their allotted 20 overs. In response, Williamson's unbeaten 66-run knock and J Suchith's not-out 14-run cameo helped the side to equal the score in 20 overs.

Chasing 160, Jonny Bairstow and skipper David Warner provided a steady start as they build a 28-run stand for the opening wicket.

Warner got run out in the fourth over after scoring just six runs. Kane Williamson and Bairstow guided the side to the 50-run mark. The duo added a 28-run stand for the second wicket. Aven Khan dismissed English batsman in the sixth over. Bairstow played a knock of 38 runs off 18 balls including four sixes and three fours.

Williamson held one end strong but the side lost Virat Singh (4) and Kedar Jadhav (9) cheaply. Avesh bagged Virat in the 12th over while Amit Mishra clinched Jadhav in the 15th over.

Abhishek Sharma joined Williamson in the middle after Jadhav's departure. Meanwhile, Kiwi completed his half-century off 42 balls in the 16th over.

In the 17th over, Axar Patel scalped two wickets as he sent Abishek (5) and Rashid Khan (0) on successive balls. Vijay Shankar joined Williamson in the middle. SRH were at 121/4 after 17 overs.

SRH required 39 balls from 18 balls. Shankar (8) failed to support Williamson as he was picked by Avesh in the 19th over. Suchith's 14-run cameo off six balls helped the side to level score on the last balls of the 20th over.

Shaw and Shikhar Dhawan provided a flying start to the side. Shaw showed his intent from the word go as he smashed three back-to-back fours off Khaleel Ahmed in the first over.

The duo played aggressively and accumulated as many runs as possible in the first six overs. Both the openers added 51 runs in six overs.

Shaw and Dhawan knitted an 81-run partnership between them. Meanwhile, Shaw completed his second half-century of the season off 35 balls.

Spinner Rashid Khan finally broke the partnership in the 11th over as he clean bowled Dhawan after scoring 28 runs.

Skipper Rishabh Pant joined Shaw in the middle but the latter's knock came to an end as he was run out by Ahmed. Shaw departed after amassing 53 off 39 including seven fours and a six.

Steve Smith and Pant steered the side to the three-figure mark. Pant played in an aggressive manner and added 37 off 27 studded with six and four boundaries.

Siddarth Kaul sent Pant back to the pavilion in the 19th over. Kaul bagged newcomer Shimron Hetmyer (1) too on the last ball of the penultimate over. Delhi were at 145/4 after 19 overs.

Marcus Stoinis came in to bat at number six. Delhi accumulated 14 runs from the last over of the innings. Smith remained unbeaten on 34 runs while Stoinis scored not out two runs as Delhi scored 159/4 in their 20 overs.