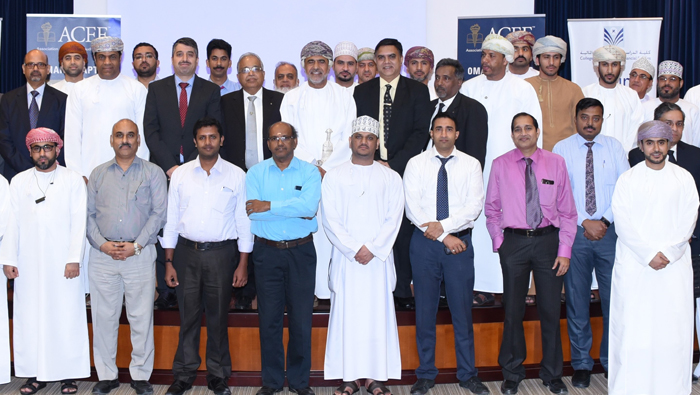 Muscat: Dr Hamad Bin Salim Al Rawahi, Executive President of the Telecommunication Regulatory Authority inaugurated the Association of Certified Fraud Examiners (ACFE) seminar on 'Operations & Cyber Security Risks'.
The evening seminar was held at the Muscat hall of the College of Banking and Financial Studies (CBFS) in Bousher.
Welcoming the delegates at the seminar, Davis Kallukaran, President of ACFE Oman Chapter, said that “Cyber Security risks is the biggest challenge faced by every business.“Billions of dollars in losses have already been discovered. Billions more have gone undetected. Trillions will be stolen, most without detection by the emerging master criminal of the twenty first century, the cyber space offender."
"This was written in 1995 by Criminal Justice Scholar Gene Stephens in his article on Crime in Cyber Spaces. It is our responsibility to reach the message to the general public in all its seriousness,” he added.
The Financial Express reports that the impact of cyber-crime could be greatly damaging to a business in terms of cost on account of disruption of trading, loss of reputation, theft of corporate information and so on.
In the United States 73 per cent of net surfers have fallen to cybercrime which is ranked 3rd after China at 83 per cent and Brazil and India at 76 per cent. Cybercrime affects the society in different ways, it is a criminal act.
According to a report by Symantec, more than 1.5 million people fall victim to cybercrime everyday ranging from simple password theft to extensive monetary swindles with an average cost of US$197 per victim. This add up to more than US$110 billion lost to cybercrime worldwide every year. It affects the very foundation of our modern information society.
Cyber terrorism is yet another serious crime which resort to recruitment and plan attacks on innocent people in countries across the Globe. Bytes are replacing bullets in cybercrime, Kallukaran added.
The talk on Operations and Cyber Crime Risks was delivered by Dr Venkatesh Kallur, Chief Risk Officer Al Izz Islamic Bank.
He said that the finance Industry is top looser in the Cybercrime attacks worldwide. Jose Chacko, Vice President of the Chapter explained the various activities of the Chapter and informed the attendees that the Chapter is continuously updating the members on the development in the profession and also holds training sessions for candidates desirous of becoming a Certified Fraud Examiner (CFE).
Ishita Mithani ACCA, compered the event which was attended by financial experts from most of the major institutions in Oman including the regulators