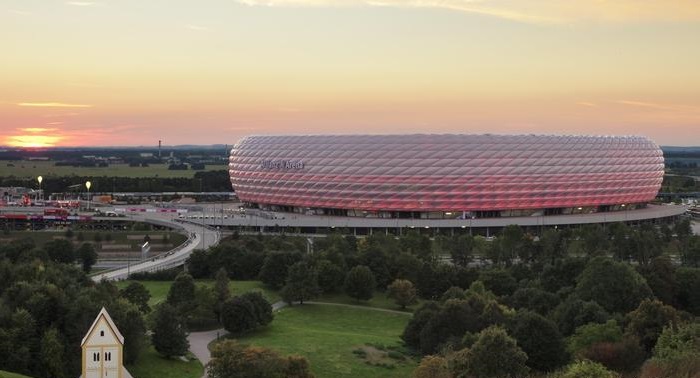 UEFA's Executive Committee announced on Friday that the city of Munich will retain its right to host four games at this summer's European Championship.

The Bavarian capital has been given the green light to host all three of Germany's group-stage games, plus one quarterfinal, although it remains unclear how many supporters, if any will be allowed to attend.

Although local organizers had appeared confident ahead of Friday's meeting, they were clearly delighted with the outcome.

"The health and protection of people is our highest priority. However, the Euro games in Munich this summer should help us to look forward to a time after the pandemic," said former Germany captain Philipp Lahm, the managing director of the local organizing committee.

German Football Association (DFB) President Fritz Keller also spoke of a positive signal about the COVID-19 coming to an end, sometime in the future.

"Therefore, we are happy about the confirmation of UEFA and look forward to great matches at UEFA Euro 2020 in Munich," Keller said. "Maybe even in front of spectators, if the development of the pandemic allows it."

As Keller alluded to, Munich was one of three of the designated Euro 2020 host cities that had failed to provide a guarantee that at least some fans would be allowed into their stadiums for the games this summer.

However, the DFB had pledged to do all it could to make this happen, saying in a statement posted on its website on Friday that: "the government of the Free State of Bavaria has expressed its support for the lead scenario" drawn up in cooperation with Munich authorities, which provides for a "minimum capacity of 14,500 spectators" at Bayern Munich's Allianz Arena.

Last month, UEFA President Aleksandar Ceferin had demanded that all host cities guarantee that at least some spectators would be allowed into the stadiums.

"Every host must guarantee there will be fans at their games," Ceferin told the Croatian publication Sportske Novosti, also noting that "one guarantee we can make is that the option of playing any Euro 2020 match in an empty stadium is off the table."

Bilbao and Dublin out


The Spanish city of Bilbao had been informed this week that it had lost its right to host matches after the Spanish FA (RFEF) said earlier this month that COVID-19 restrictions imposed by the Basque region made it "impossible" to admit fans to Athletic Bilbao's San Mames stadium.

At Friday's meeting, UEFA announced that the four games that were to have been played there will be moved to the Estadio La Cartuja in Seville. UEFA said that Spain's region of Andalusia had "confirmed its intention of allowing spectators at 30% of the stadium capacity for the three Group E matches and a Round of 16 match."

Dublin also lost the right to hold matches due to their local authorities' failure to guarantee that there would be at least some fans inthe stands.

UEFA have annonced that the three Group E matches initially to be played in Dublin would be moved to Saint Petersburg Dublin's round-of-16 match is going to London's Wembley Stadium.


The decisions to drop Bilbao and Dublin but let Munich keep all of its Euro 2020 matches came at the end of a turbulent week for European football, which started with the announcement by 12 clubs from England's Premier League, Italy's Serie A, and Spain's La Liga, that they intended to break away and form their own Super League.

This quickly collapsed amid angry opposition from supporters, UEFA, FIFA, national FA and league officials, as well as some politicians. This has arguably left UEFA boss Ceferin in a position of enhanced strength.

It has also seen Juventus boss Andrea Agnelli resign from the UEFA Executive Committee in the wake of the ill-fated project that the Italian had spearheaded.

Bayern Munich CEO Karl-Heinz Rummenigge and Paris Saint-Germain President Nasser Al-Khelaifi were elected to the committee this week, in what some view as a tacit reward for having refused to join the renegade project.


The idea of staging Euro 2020 in cities across the continent was the brainchild of former UEFA President Michel Platini, who envisioned it as a one-off to celebrate the 60th anniversary of the first European Championship hosted by France in 1960.

The COVID-19 pandemic has made the idea much more difficult to pull off than originally thought, as evidenced by the fact that it had to be delayed by a year.

Still, it appears set to go ahead, with Budapest, St Petersburg, Baku, Amsterdam, Bucharest, Glasgow, Copenhagen, Rome and London all having promised crowds of between 25% and 100% capacity for the Euros which open on June 11 and wrap up with the final at Wembley on July 11.