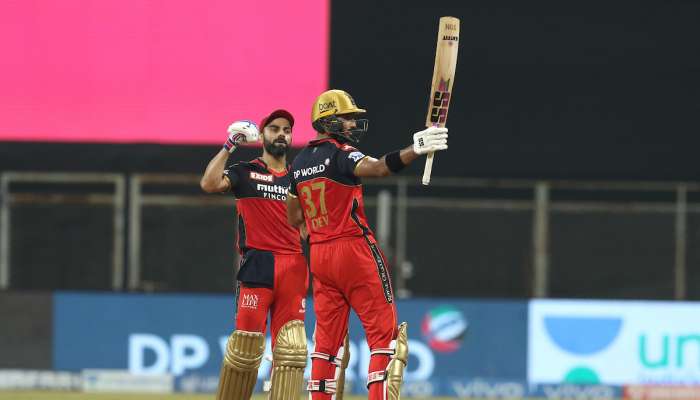 Chasing 178, Padikkal and Kohli displayed an amazing show with the bat as both the openers took RCB across the line in 16.3 overs. Padikkal scored his 101 runs in just 52 balls with the help of 6 sixes and 11 fours while Kohli played the second fiddle and smashed 3 sixes and 7 fours in his 47-ball knock. The India captain also became the first batsman to complete 6,000 runs in the IPL.

Earlier, Shivam Dube and Rahul Tewatia played knocks of 46 and 40 runs respectively to steer Rajasthan Royals to 177/9 in their allotted 20 overs.

Put in to bat first, Rajasthan didn't have a great start as they lost both openers Jos Buttler (8) and Manan Vohra (7) within the first four overs.

The fall of wickets did not stop as David Miller too departed on a two-ball duck. Pacer Mohammed Siraj picked his second scalp of the day as he caught Miller in front of the wickets.

Skipper Sanju Samson and Dube tried to pull together the innings and added some quick runs for the fourth wicket. The duo added 25 runs before Kane Richardson removed Samson (21) and broke the partnership in the eighth over.

Riyan Parag then joined Dube and the duo added 66 runs off 39 balls for the fifth wicket. Dube looked in great touch and Parag supported him nicely in the partnership. Parag's 25-run stint was ended by Harshal Patel in the 14th over.

Rahul Tewatia came in to bat at number seven and along with Dube added 24 runs together before the latter was sent back to the pavillion by Richardson in the 16th over. He played a knock of 46 off 32 balls.

Chris Morris and Tewatia steered the side to the 150-run mark. Tewatia's wicket was bagged by Siraj in the 19th over. He played a knock of 40 off 23 including two sixes.

In the last over, Rajasthan lost Morris (10) and Chetan Sakariya (0) but Shreyas Gopal added seven runs off four balls.

For RCB, Siraj and Harshal Patel bagged three wickets each.

With the win, RCB have moved to the top of the points table with four wins in four games.