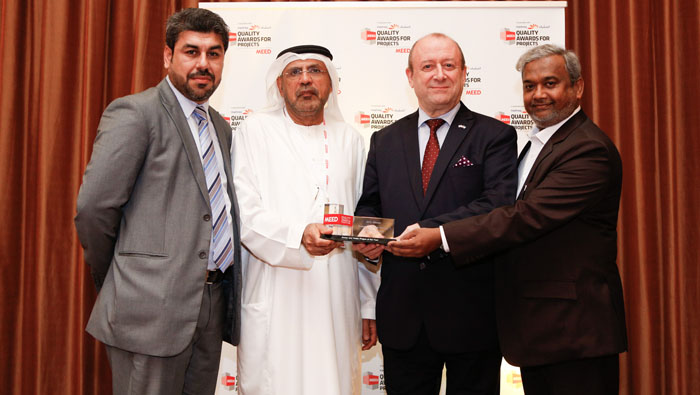 Muscat: Oman-based projects were among the big winners at the recently concluded 2016 MEED Quality Awards for Projects, in association with Mashreq.
Oman won three awards, along with the UAE, second best in the GCC to Saudi Arabia’s five-trophy haul. Bahrain and Qatar scooped two awards each, while Kuwait had one winner at this year’s edition of the annual awards programme, the only one to recognise completed projects in the region.
John Iossifidis, executive vice-president and head of Corporate and Investment Banking Group, Mashreq says: “We are proud to support the awards programme for the past four years now. The awards have definitely shed the spotlight not just on excellence and quality, but also on the award-winning projects’ valuable contribution to the economic development of the region.
“And the long-term viability of the projects sector by sending a clear message to the market, that quality is essential in all parts of the project management process; from design planning to engineering and construction. We wish all participants all the very best,” he added.
Oman continued its winning ways in this year’s edition of the awards, scooping the GCC Power & Water Project of the Year with the Public Authority for Electricity &Water (PAEW)’s Construction of Emergency Water Storage Reservoirs Project (nominated by Al Hassan Engineering).
To prevent residents of Muscat from experiencing water shortages, PAEW commissioned a project to guarantee the supply of water for at least seven days. The water storage reservoirs are expected to meet forecast demand up to 2035.
After the facilities at the Al Qurumsite were handed over, residents were able to obtain their required water supply without additional pumping. Moreover, PAEW now maintains seven days’ water stock to cater for any emergency situation
Muscat Municipality’s Design & Construction of Underpasses & Flyovers Darsait-Al Wadi Al Kabir Road Project (nominated by Larsen & Toubro-Oman) won the GCC Road &Bridge Project of the Year.
The project included the construction of flyovers and a subway, and the development of all junctions along the carriageway, and is helping to relieve the heavy traffic congestion in the area. One challenge that had to be overcome was the legacy of utilities dating back several decades. The project successfully relocated decades-old live, crisscrossing service networks along 133 kilometres by coordinating with more than 10 independent authorities. It also successfully diverted and managed the huge volumes of traffic by maintaining the same lane configuration and undertaking more than 725 small and big diversions without notable inconvenience to traffic or any major safety hazard. Safety is an important consideration when measuring projects of this kind, and by clocking almost 7 million safe man-hours, the project team has raised the benchmark for completing such urban projects.
The final winner from Oman was Al Taher Group Company’s Oman Avenues Mall Extension to Lulu Hypermarket in Bausher- Stage 2 Project (nominated by SAM Engineering) which received the GCC Retail Project of the Year award.
Inaugurated in May 2015, Oman Avenues Mall has an estimated80,000 square metres of leasable area spread across five storeys, along with space to park about 3,400 vehicles. Some of the distinctive features of the mall include various sections dedicated to different types of brands and categories, as well as entertainment facilities.
The Sultanate’s largest indoor family entertainment centre will open at the mall this year. Oman Avenues Mall is the first mall in the sultanate to have extensive facilities for party halls and a convention centre. It also houses one of the country’s largest health clubs.
A second-phase expansion will see the construction of a cinema and several shops at an estimated cost of $86.8 million. The second phase will be built on top of the mall’s existing LuLu Hypermarket, which is spread across20,000 square metres.
Now in their sixth year, the MEED Quality Awards for Projects, in association with Mashreq, have established themselves as the leading stamp of quality and achievement for stakeholders in the GCC projects sector.
Part of the MEED Construction Leadership Summit, the awards not only recognise the construction element of project delivery but also consider the value and quality of a project throughout its entire life-cycle, from the design concept through to engineering and construction and its wider contribution to society and the environment.