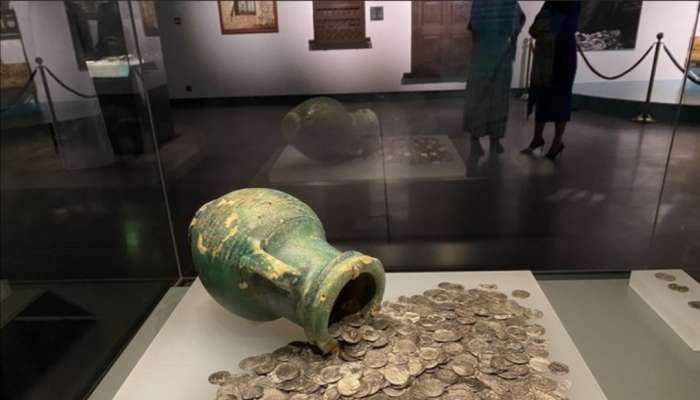 Muscat: A hoard of coins discovered in Sinaw has turned out to be one the largest of its kind in Oman.

A statement issued by the Oman News Agency (ONA) said, “The Sinaw archaeological treasure is the largest coin treasure found in the Sultanate until today. It was found inside a pottery vessel in Shawwal 1399/September 1979 in the Sinaw district in the state of Al Mudhaibi in the North Al Sharqiyah Governorate. The glazed vessel is distinguished in turquoise blue and has handles on both sides. Inside the vessel, 962 pieces of silver dirhams, dating back to the early Sasanian and Islamic eras were found.”

Plenty of activities to raise awareness of Oman’s history have been held recently. The National Museum recently concluded its Creative Imagination Programme, which had been organised to document historical images and the country’s heritage. The programme consisted of 14 classes organised in two stages: the first at the museum headquarters, and the second through visual conferencing.

The National Museum said in a statement, “The programme enabled participants to learn about creative imagination methods using collage techniques, which integrate images of Omani archaeological collections and other materials in different ways and methods of two and three dimensions that revive heritage and history anew.”
Three weeks ago, the National Museum also conducted a lecture in archaeology, in collaboration with the Geological Society of Oman.

The lecture was presented by Dr Mohammed Al Kindi from the Earth Sciences Consultancy Centre (ESCC), and Dr Maria Pia Maiorano of the University of Naples.

The lecture reviewed the surveys made by a team of archaeologists and geologists between 2019 and 2020 in the south eastern borders of the Omani part of the Empty Quarter.

The studies revealed huge numbers of objects that helped to learn about the stratigraphic geology of the region, climate history, and archaeology.

According to ONA, “The two lecturers also touched on the findings of the survey, which revealed many stone tools that indicate settlement in different periods of the Palaeolithic and Neolithic periods.

“These tools included stone animal holdfasts, stone pestles, arrowheads, and stone axes. These tools were found side by side along with the fossils of animal bones that humans hunted in those ancient times.”

Sites of antiquity that have archaeological significance are popular attractions for people. Last year, nearly 12,500 people visited the Salut archaeological site in Ad Dakhiliyah, and the Land of Frankincense site in the Dhofar.

“The Office of His Majesty the Sultan’s Advisor for Cultural Affairs is developing several archaeological sites and providing them with utilities to serve the goals of cultural and archaeological tourism in the Governorate of Dhofar,” the ONA added.

Al Baleed Archaeological Park in Samahram, the Shasir Area, and Wadi Dawkah are registered sites on the UNESCO World Heritage List under the name ‘Land of Frankincense’.